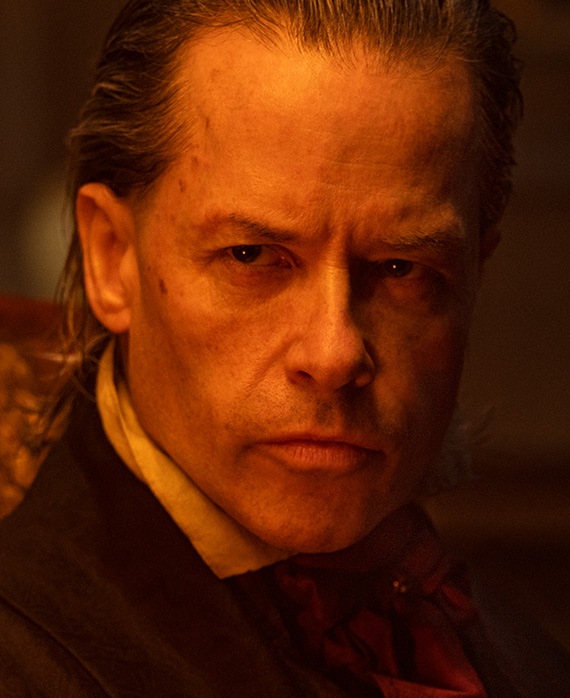 On Christmas Eve we meet "Ebenezer Scrooge," portrayed by Guy Pearce. A skinflint, he’s isolated, begrudging and resentful of the world. He is aloof and miserable, always testing humanity to find the worst in people and to ratify his own confirmation bias. All the friendships he had in the world he has lost. The hope and optimism he had as a child have been shattered by a brutal upbringing. Can the advent of his business partner Marley and the arrival of the three ghosts reinvigorate the spirit, joy and hope of a once-lost boy?

One of the most versatile actors of his generation, Guy Pearce's career has spanned over 25 years in film, television and theatre in Australia and internationally.

Pearce first made his mark in the 80s in the highly successful TV series Neighbours. His work in Australia has been extensive. In 2014, he starred in The Rover, which was his second time collaborating with David Michôd after the internationally successful Animal Kingdom with Jackie Weaver, Ben Mendelsohn and Joel Edgerton. Other Australian credits include Neil Armfield’s Holding the Man, John Hillcoat’s powerful drama The Proposition written by Nick Cave, The Hard Word starring Rachel Griffiths, Pauline Chan’s 33 Postcards, In Her Skin, Till Human Voices Wake Us alongside Helena Bonham Carter and Stephan Elliott’s box office sensation The Adventures of Priscilla: Queen of the Desert.

In 2011, Pearce appeared as “Monty Beragon” in the Todd Haynes adaption of Mildred Pierce for HBO alongside Kate Winslet. His performance was met with critical acclaim winning him an Emmy® Award for Best Supporting Actor.

He has recently been seen in Mary Queen of Scots alongside Saoirse Ronan and completed the second season of Jack Irish.