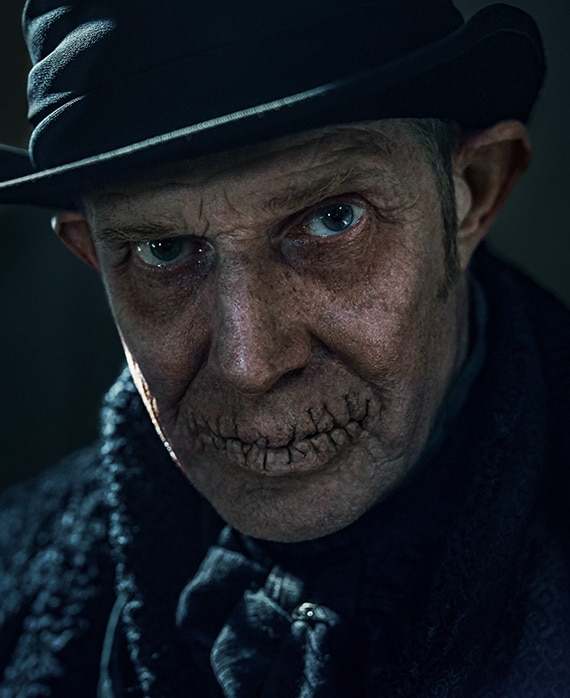 A menacing figure, the "Ghost of Christmas Future," portrayed by Jason Flemyng, is tall, hooded and silent. His mouth is stitched tightly together. He cannot change the future, he can only show what may come to pass. The night is dark and foreboding and he holds the key to "Scrooge’s" nightmares.

Flemyng's first major film role came in 1998 where he starred as the lead in Guy Ritchie's London gangster feature Lock, Stock, and Two Smoking Barrels. Other early film credits include François Girard’s The Red Violin, Stephen Sommers’ Deep Rising, Guy Ritchie’s Snatch, George A. Romero's Bruiser and Stephen Herek’s Rock Star. Flemyng starred in The Hughes Brothers’ From Hell alongside Johnny Depp and in Stephen Norrington’s The League of Extraordinary Gentlemen alongside Sean Connery. Later film credits include Mirrors, The Curious Case of Benjamin Button, which he had a leading role in opposite Brad Pitt, X-Men: First Class, The Social Network, I Give It a Year, Welcome to the Punch, Gemma Bovery and Lance Nielson’s The Journey which Flemyng also executive produced. Flemyng recently made his directorial debut on Eat Local that was released last year. He has just finished filming Military Wives alongside Kristin Scott Thomas and Sharon Horgan for Oscar®-nominated director Peter Cattaneo.

His TV credits include BBC Four’s The Quartermass Experiment, ITV cult drama series Primeval, Channel 4’s Black Mirror and the Starz/BBC hit crime drama The Missing. In 2017 he starred in the NBC/Sky hit series Jamestown, which just finished filming its third series, as well as the BBC miniseries SS-GB alongside Sam Riley and Kate Bosworth. Last year Flemyng starred in the acclaimed Starz/Sky series Save Me created by Lennie James, for which he will reprise his role in the second season. He has also just wrapped filming on Pennyworth for Warner Bros TV.