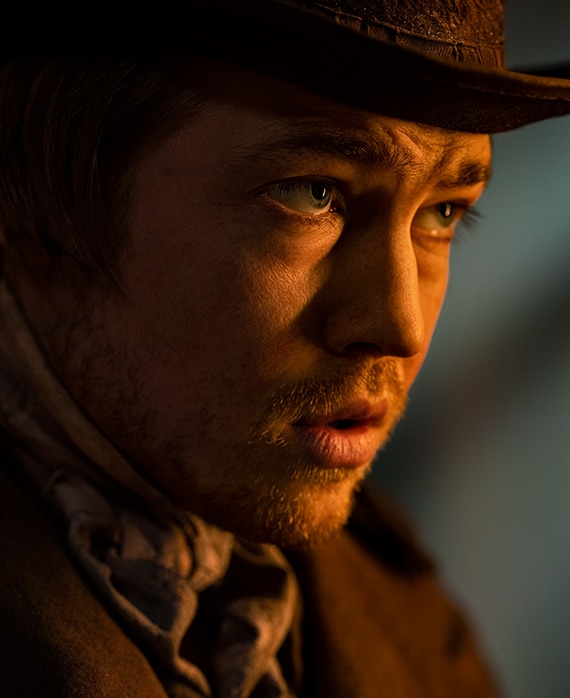 "Bob Cratchit," portrayed by Joe Alwyn, works constantly for "Scrooge" on little pay and even less recognition. His loyalty is not rewarded, and yet he persists at Scrooge’s, wryly returning banter with his boss and letting things lie, until the stakes get much, much higher. And he won’t take any more.

In 2018, Alwyn starred in Operation Finale as “Klaus Eichmann” alongside Oscar Isaac and Ben Kingsley. Directed by Chris Weitz and written by Matthew Orton, the film takes place 15 years after World War II, when a team of secret agents are brought together to track down Adolf Eichmann, the infamous Nazi architect of the Holocaust. He also appeared in Boy Erased from Joel Edgerton, who directs and stars in this film based on Garrard Conley’s book Boy Erased: A Memoir of Identity, Faith, and Family. Also starring Russell Crowe, Nicole Kidman and Lucas Hedges, the story follows the son of a Baptist preacher who is forced to participate in a church-supported gay conversion program.

Alwyn also starred in Yorgos Lanthimos’ critically acclaimed film The Favourite, starring opposite Emma Stone, Rachel Weisz and Olivia Coleman. It is set during the reign of Queen Anne and centers on a love triangle and power struggle among the women of the court. The film received the Grand Jury Prize at the 2018 Venice International Film Festival, was selected at the opening film at the 2018 New York Film Festival and was nominated for an Academy Award® for Best Picture.

In Mary Queen of Scots, Alwyn takes on the role of Robert Dudley, Queen Elizabeth’s counselor and lover. Featuring Margot Robbie as Elizabeth and Saoirse Ronan as Mary, the film chronicles the historical family rivalry between the two, when the latter attempted to overthrow her cousin’s seat on the English throne.

2017 also saw Alwyn in Ritesh Batra’s BBC Films movie The Sense of an Ending. Based on a book by the same name written by Julian Barnes, and adapted for the screen by Nick Payne, the film follows "Tony Webster" who becomes haunted by his past and is presented with a mysterious legacy that causes him to rethink his current situation in life. Alwyn appeared opposite Jim Broadbent, Charlotte Rampling, Emily Mortimer, Michelle Dockery, Billy Howle and Freya Mavor.

Alwyn can next be seen in Focus Features’ historical drama Harriet, directed by Kasi Lemmons, set for a 2019 release.

Alwyn studied English and Drama at Bristol University and then at the Royal Central School of Speech and Drama. He was selected as one of the 2015 Screen International “Stars of Tomorrow” that celebrates international up-and-coming talent. Alwyn was also selected as the face of the SS18 Prada campaign.