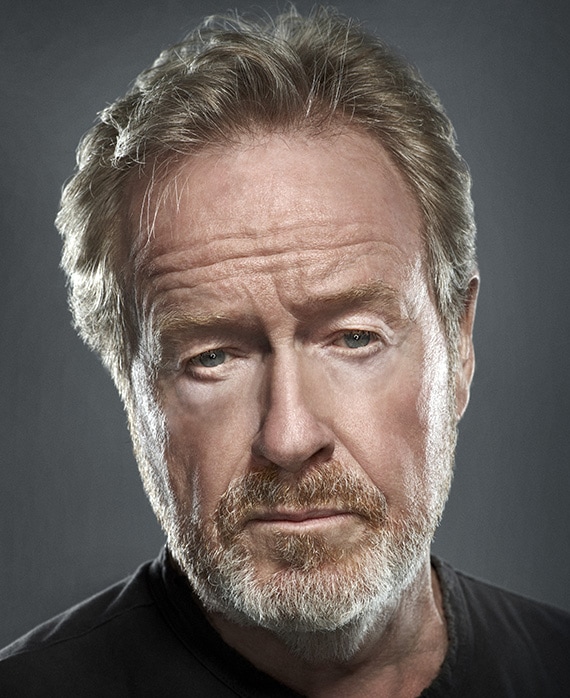 Ridley Scott is a renowned Academy Award®-nominated filmmaker honored with Best Director Oscar® nominations for his work on Black Hawk Down (2001), Gladiator (2000) and Thelma & Louise (1991). All three films also earned him DGA Award nominations. Scott’s most recent directorial releases were Alien: Covenant (2017), the sequel to Prometheus starring Michael Fassbender and Katherine Waterston and All the Money in the World (2017), starring Mark Wahlberg, Michelle Williams and Christopher Plummer, about the kidnapping of John Paul Getty III.

In 1977 Scott made his feature-film directorial debut with The Duellists, for which he won the Best First Film Award at the Cannes Film Festival. He followed with the blockbuster science-fiction thriller Alien in 1979, which catapulted Sigourney Weaver to stardom and launched a successful franchise. In 1982, Scott directed the landmark film Blade Runner, starring Harrison Ford. Considered a sci-fi classic, the futuristic thriller was added to the U.S. Library of Congress’ National Film Registry in 1993 and a director’s cut was released to renewed acclaim in 1993 and again in 2007.

Scott and his late brother Tony formed the commercial and advertising production company RSA in 1967. RSA has an established reputation for creating innovative and groundbreaking commercials for some of the world’s most recognized corporate brands.

In 1995 the Scott brothers formed the film and television production company Scott Free. With offices in Los Angeles and London, the Scotts produced such films as In Her Shoes, The A-Team, Cyrus, The Grey and the Academy Award-nominated drama The Assassination of Jesse James by the Coward Robert Ford. Recent releases include Blade Runner 2049, the long-awaited sequel to the 1982 sci-fi classic, and the worldwide hit Murder on the Orient Express, an adaptation of the Agatha Christie novel of the same name.

On television, Scott executive produced the Emmy®, Peabody and Golden Globe-winning hit The Good Wife, for CBS and its critically-acclaimed CBS All Access spin-off The Good Fight. The series adaptation of Philip K. Dick’s classic The Man in the High Castle for Amazon, FX’s Taboo starring Tom Hardy, AMC’s anthology series The Terror, the FOX drama The Passage based on Justin Cronin’s post-apocalyptic trilogy and a TV series-adaptation Strange Angel based on the George Pendle book of the same title. Scott is currently filming Raised by Wolves, a highly anticipated flagship TNT sci-fi series, for which he serves as director and executive producer.

Scott has also been an executive producer on the company’s long-form projects, including the Starz miniseries The Pillars of the Earth, the A&E miniseries The Andromeda Strain, the TNT miniseries The Company, the award-winning HBO movies RKO 281, The Gathering Storm and Into the Storm, the hit National Geographic telefilms Killing Lincoln, Killing Kennedy and Killing Jesus as well as documentaries including the Emmy-winning special Gettysburg for History Channel, Hulu’s Re: Generation Music Project, National Geographic’s I Am Dying and Apple’s Clive Davis: The Soundtrack of Our Lives.

In 2003, Scott was awarded a knighthood from the Order of the British Empire in recognition of his contributions to the arts. He received the 30th American Cinematheque Award at the organization’s annual gala in 2016, the Lifetime Achievement Award in Motion Picture Direction at the 2017 Directors Guild of America Awards and the Academy Fellowship honor at the 2018 BAFTA Awards.