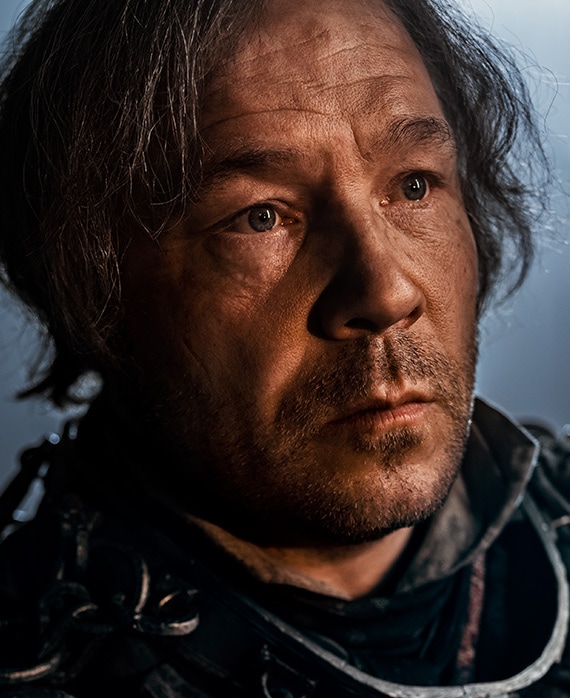 "Jacob Marley," portrayed by Stephen Graham, lies in his coffin and regrets. He regrets his miserliness, the risks he took, the penny-pinching that resulted in his factories being run down, his workforce pushed to the brink, ensuring accidents and calamities, lives lost, communities crushed. His guilt haunts him. He wishes to repent. He is sent on a journey of the soul – but to guarantee the safety of his – he must also save "Scrooge’s."

Graham has enjoyed continued success following his critically acclaimed performance in the 2006 BAFTA Best Picture winner This is England, directed by Shane Meadows, together with the recent follow up Channel 4 miniseries This is England ‘86, ’88 and ‘90, which also secured him a BAFTA TV Award nomination. Other notable credits include Jimmy McGovern’s The Street, in which he received a Royal Television Society Award nomination, McGovern’s Accused opposite Sean Bean and HBO’s Parade’s End with Benedict Cumberbatch. Graham is also known for playing the iconic role of Al Capone opposite Steve Buscemi in Martin Scorsese’s Boardwalk Empire which ran for five seasons. His most recent television credits include ITV’s Little Boy Blue, The Watchman and the BBC’s Decline and Fall, The Secret Agent and FX’s Taboo alongside Tom Hardy.

In 2018, Graham starred in Sky's Save Me created by Lenny James, which earned Graham a nomination for Best Supporting Actor at the 2019 BAFTA TV Awards. 2019 saw Graham join the cast for the highly anticipated return of Jed Mercurio’s Line of Duty alongside Adrian Dunbar, Martin Compston and Vicky McClure. The first episode launched with 11.4 million viewers and 38% audience share. In May 2019 Stephen teamed up with Shane Meadows once again for Channel 4’s The Virtues. Graham has filmed a new Sky series, a police comedy with Danny Mays, Code 404.

Graham’s film credits include his portrayal of Baby Face Nelson opposite Johnny Depp and Christian Bale in Public Enemies, The Fields opposite Sam Worthington, London Boulevard opposite Keira Knightley and Colin Farrell, Season of the Witch opposite Nicolas Cage and Pirates of The Caribbean: On Stranger Tides opposite Johnny Depp and Penelope Cruz. Other credits include Tinker, Tailor, Soldier, Spy; Hyena, Get Santa, A Patch of Fog and Pirates of The Caribbean: Dead Men Tell No Tales. His most recent credits include Film Stars Don’t Die in Liverpool, directed by Paul McGuigan, Funny Cow and Journey’s End opposite Paul Bettany, Sam Claflin and Asa Butterfield. 2019 saw Graham featured in Rocketman alongside Taron Egerton playing Dick James. Graham will next star in The Irishman for Netflix as Anthony ‘Tony Pro’ Provenzano opposite Al Pacino and Robert De Niro. Graham soon after will star in Greyhound alongside Tom Hanks.