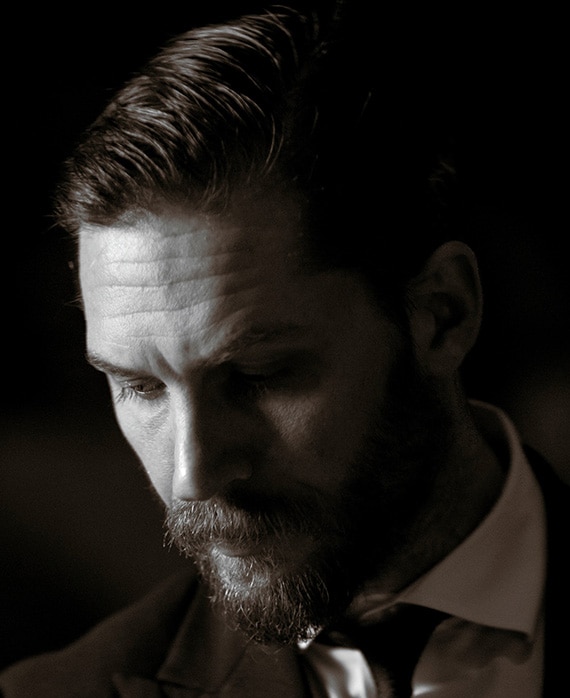 As an Academy Award®-nominated actor and producer, Tom Hardy CBE has quickly become one of today’s most versatile and sought-after talents, earning widespread acclaim and recognition over the years from critics and audiences alike for his transformative performances and extensive range across a variety of mediums, including film, television and theatre.

Hardy earned his first Oscar® nomination in 2016, for Best Supporting Actor, for his performance as 19th Century frontiersman “John Fitzgerald” in Alejandro González Iñárritu’s epic drama The Revenant, for which he also garnered a Critics’ Choice Award nomination. That same year, Hardy also received a Critics’ Choice Award for his performance as the iconic “Mad Max Rockatansky” in George Miller’s critically acclaimed hit Mad Max: Fury Road, as well as a British Independent Film Award for Best Actor in Brian Helgeland’s crime drama Legend, which saw Hardy tackle dual roles as notorious identical twin British gangsters “Ronald” and “Reginald Kray.” As a result of his collective work in 2015, the London Critics’ Circle went on to honor Hardy with their prestigious British Actor of the Year award on behalf of all his performances that year.

Hardy most recently appeared on screen in the title role of the global box-office phenomenon Venom, marking the inaugural standalone film for one of Marvel’s most beloved comic-book characters and going on to become the highest-grossing superhero origin movie of all time. The sequel, directed by Andy Serkis, is currently in production and will see Hardy reprise his role as “Eddie Brock/Venom.” Hardy will next be seen in Josh Trank’s Fonzo, where he takes on the role of legendary gangster Al Capone in the final days of his life.

In addition to performing, Hardy is also the Founder and CEO of UK production company Hardy Son & Baker, which he formed in 2012 with partner Dean Baker. HSB most recently teamed with Ridley Scott’s Scott Free Productions and writer Steven Knight to produce the forthcoming movie A Christmas Carol, the first in a series of adaptations based on Charles Dickens’ timeless classics and set to debut in December 2019 on BBC One in the U.K. and FX in the U.S. The project marks the second collaboration for HSB, Scott Free and Knight following their work together in 2017 on the acclaimed Emmy®-nominated and BAFTA-winning drama series Taboo, also for BBC One and FX. The company’s feature projects in development include Once a Pilgrim, based on the novel written by ex-SAS soldier James Deegan and in collaboration with Working Title; an Untitled Shackleton Project, written by Peter Straughan and based on the renowned British explorer Ernest Shackleton who led multiple expeditions to the Antarctic; and an Untitled Don McCullin Project, based on the life of the legendary British war photographer. Television projects in development include a second season of the FX/BBC One series Taboo; the second installment in the FX/BBC One series of Charles Dickens adaptations; and several new scripted series for NBCUniversal, including Warlord, penned by award-winning screenwriter John Henry Butterworth and Parker, created by Josh Trank and based on the series of novels by Donald E. Westlake.

On television, Hardy most recently starred as “James Keziah Delaney” in the 2017 FX and BBC One series Taboo, which he also co-created and produced, as well as in a recurring role on Steven Knight’s award-winning BBC series Peaky Blinders as the character “Alfie Solomons.” In 2008, Hardy earned a Best Actor BAFTA nomination for his performance in the HBO movie Stuart: A Life Backwards and portrayed “Heathcliff” in the 2009 ITV production of Wuthering Heights. His small screen credits also include the telefilms Oliver Twist, A for Andromeda, Sweeney Todd, Gideon’s Daughter and Colditz, as well as the BBC miniseries The Virgin Queen.

On stage, Hardy has starred in numerous plays on the London West End, including Blood and In Arabia We’d All Be Kings, winning the Outstanding Newcomer Award at the 2003 Evening Standard Theatre Awards for his work in both productions and a 2004 Olivier Award nomination for the latter. In 2005, Hardy starred in the London premiere of Brett C. Leonard’s Roger and Vanessa. His stage work also includes Rufus Norris’ adaptation of Festen at the Almeida; The Modernists at Sheffield’s Crucible Theatre; The Man of Mode at the National Theatre; and the 2010 world premiere of Leonard’s The Long Red Road, directed by Philip Seymour Hoffman at Chicago’s Goodman Theatre.

In 2018, Hardy was awarded Commander of the Order of the British Empire (CBE) in recognition for his services to drama. Hardy currently serves as an Ambassador for The Prince's Trust, the Royal Marines Charitable Trust Fund (RMCTF), the REORG Jiu Jitsu Foundation, Battersea Dogs & Cats Home and Help For Heroes. In addition, he is the President of Hari Budha Magar’s Gurkha Everest Expedition, as well as a Patron for Expedition 8848, which aims to educate today’s youth on the effects of climate change and protecting the planet’s future.
See All Shows