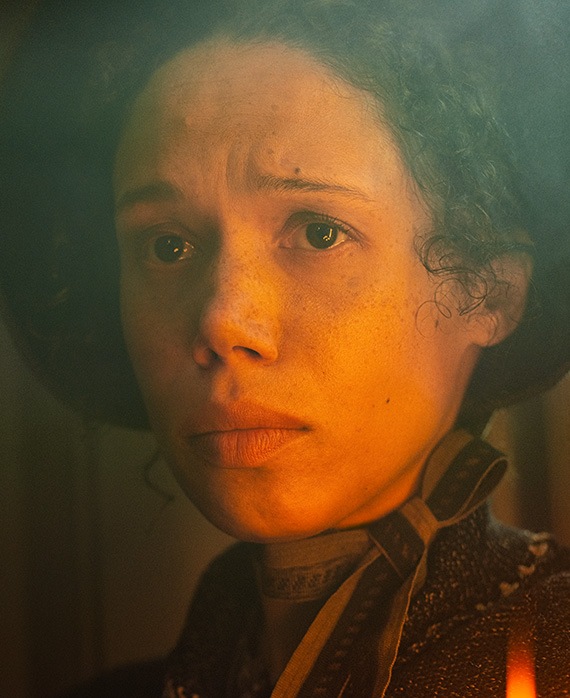 "Mary Cratchit," portrayed by Vinette Robinson, is a resilient and hardworking woman, diligent, thoughtful, careful. Vengeful. She loves her husband and her children and would do anything for them. Anything.

Robinson can currently be seen in the devastating and challenging Channel 4 show I Am... Kirsty directed by Dominic Savage. She plays “Kirsty’s” colleague “Toni,” who in the past had to turn sex work in a time of extreme financial hardship. The series also stars Samantha Morton, Vicky McClure and Paul Kaye.

Due for international release later this year, Robinson can be seen in the Palme d’Or-nominated Frankie, which was shown in a special selection at Toronto Film Festival this year. Directed by Ira Sachs, the plot follows “Frankie,” a famous French actress who learns she only has months to live. For one final family vacation she gathers everyone to Sintra, Portugal.

This year Robinson starred in the BAFTA-nominated Rosa Parks episode of Doctor Who. Robinson portrayed Parks to much critical acclaim. In the episode, The Doctor and her friends find themselves in America’s deep south. As they encounter a seamstress by the name of Rosa Parks, they begin to wonder whether someone is attempting to change history.

Earlier this year, Robinson appeared in Sir Lenny Henry’s latest project, Soon Gone: A Windrush Chronicle. The plot follows speeches from a Caribbean family over the course of four generations. They reveal the hopes and dreams throughout time from the arrived Windrush generation to their descendants.

Robinson has appeared in both seasons of BBC One’s The A Word alongside Morven Christie and Christopher Eccleston. Written by award-winner Pete Bowker, The A Word tells the story of a multi-generational family with an autistic child at its centre. Robinson plays “Nicola” who is one of the first people brave enough to suggest that the child’s so-called eccentricities may be more serious than they appear.

Robinson recently appeared as the titular role in Emilia at the Globe Theatre. Written by Morgan Lloyd Malcolm and featuring an all-female cast, the play follows the story of Emilia Bassano, who potentially could have been the real author of Shakespeare’s Sonnets. Critically acclaimed, it was described by What’s on Stage as, “A rollercoaster production firing on all cylinders and not stopping for a second to apologise.”

Previously Robinson could be seen in Albion at the Almeida Theatre. The play, written by Mike Bartlett and directed by Rupert Goold, was awarded five stars by both The Independent and The Telegraph who called the production “Something Remarkable.”

On television, Robinson is best known for her role as Detective Sergeant “Sally Donovan” in the BBC award-winning hit series Sherlock, alongside Benedict Cumberbatch and Martin Freeman. In 2016, she appeared in BBC2 six-episode miniseries, Close To The Enemy opposite an all-star cast including Angela Bassett, Jim Sturgess and Freddie Highmore. The same year saw her star in Ridley Scott produced sci-fi thriller Morgan alongside Kate Mara, Paul Giamatti, Toby Jones and Boyd Holbrook.

With multiple prominent theatre credits to her name, Robinson was awarded the Clarence Derwent Award for Best Female in her “deeply moving and crystal clear" performance as “Ophelia” opposite Michael Sheen in The Young Vic’s production of Hamlet, directed by Ian Rickson in 2012. In the same year as Hamlet, Robinson was also awarded the Offie Award for Best Female Performance, after her run in Tender Napalm at the Southwark Playhouse. Ahead of this, she was celebrated for her role as “Antigone” in Richard Eyre’s powerfully directed play, Welcome To Thebes at the National Theatre.