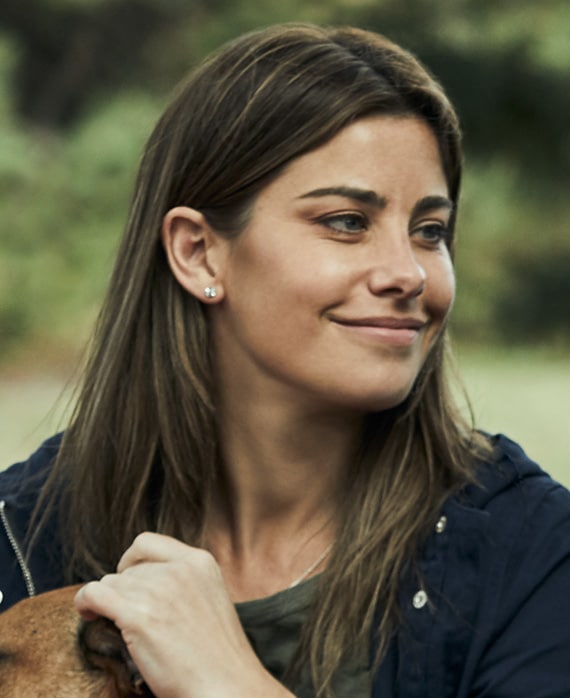 One good thing in Ray’s life is Ally, who he feels may be out of his league, but Ally is drawn to Ray, even if she doesn’t know the precise nature of his job. Ally is a paramedic. She heals, he hurts, but there’s a primal, chemical attraction and they begin a relationship, which seems to be one in which they are evenly matched. Ally, given her job, is a practical, pragmatic woman, and there’s something in Ray’s directness and dry demeanor that she appreciates. What she is increasingly alarmed by are his brief flashes of anger.

“There’s nothing superfluous about Ray, and I think that’s what Ally likes,” says actress Brooke Satchwell, who portrays her. “It’s still a fledgling relationship. Perhaps Ally has made some questionable relationship choices in the past, but I think it’s in those beginning stages of relationships when you meet someone and there are things you like about them that you focus on those aspects, potentially missing signs of issues that might come up down the track.”

Satchwell has been working as an actress since 1994. Her first role was on Neighbours, for which she won a Logie Award for Most Popular New Talent and a People’s Choice Award for Most Popular Teen Idol. After that, she turned her hand to theatre and starred in a production of The Caribbean Tempest and later The Graduate. She then returned to television as a regular on the series Water Rats and White Collar Blue. Satchwell accomplished all of this before turning 21.

Satchwell was next cast in the acclaimed miniseries Tripping Over, which shot in the UK and then the television movie Small Claims. Satchwell appeared on Play School to the delight of children and parents alike and starred in FOX8’s Dangerous opposite Joel Edgerton. Disney cast her as the female lead in Sue Brooks’ Australian comedy feature Subdivision.

Audiences enjoyed seeing Satchwell back onstage in The Clean House for Black Swan and QTC. In 2012, Satchwell joined the cast of Seven’s Packed to the Rafters. Following this, she was cast in the lead role of “Grace” in Wonderland, which ran for three seasons from 2013 to 2015. During this same time period Satchwell completed three seasons of Dirty Laundry for ABC1.

In 2014, Satchwell narrated Crack Up, a heartwarming documentary following a group of Australians participating in a comedy course aimed at people with mental illness. In 2015, she was asked to join a select group of high-profile Australians to read the letters and diaries of men and women from World War I for ITV and Network Ten’s First Anzacs.

Satchwell appeared in Black Comedy for the ABC and reprised her role in 2016. She also appeared in the webseries Footballer Wants a Wife, Bleak and Jack Irish for ABC TV and the feature film What Time is My Heart. Satchwell returned once more to the stage in Ensemble Theatre’s Jack of Hearts, directed by David Williamson.

In 2017, Satchwell toured nationally in the UK’s Lunchbox production of The Play That Goes Wrong in the lead role of “Sandra.” Following this, she returned to television to star in Mr Inbetween, directed by Nash Edgerton and in Dead Lucky, directed by David Caesar. In 2018, Satchwell completed principal photography of Rachel Griffiths' feature Ride Like A Girl, a short feature concept called The Hitchhiker and See-Saw Films’ The End, a 10-part drama series.

Satchwell has worked as a camera operator on documentaries, produced short films and continues to develop her own projects.

She ceaselessly campaigns for causes she is passionate about and has been an ambassador for the RSPCA, World Vision and the Make-A-Wish Foundation. Satchwell continues to work on behalf of Make Poverty History and The Bottled Water Alliance, and is a donor and advocate of the Sunrise Orphanage Siem Riep. As an ambassador for Save the Children, Satchwell confronted her fear of heights by abseiling 36 floors of the Gold Tower in 2012, and again in 2013. Satchwell was also part of the “Don’t DIS My Appearance” campaign launch in support of the Butterfly Foundation.