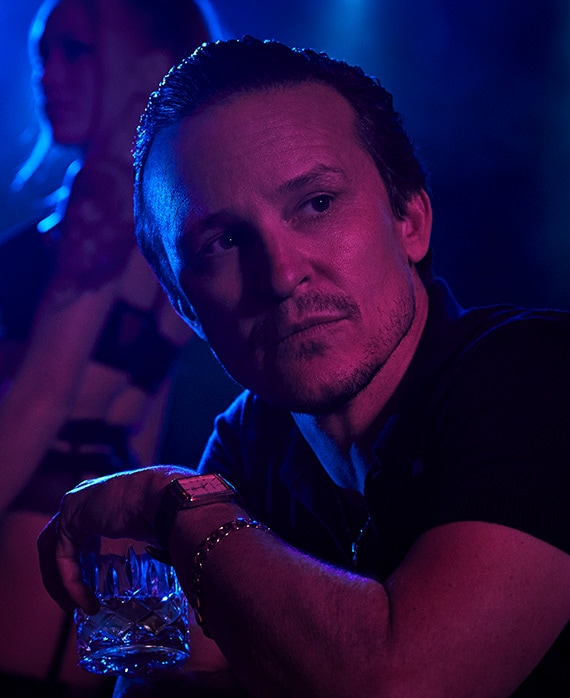 Freddy is Ray’s boss. He runs his business out of a strip joint and is a guy that people go to if they need a hit put on someone, or a debt collected; feeding these jobs through to Ray or one of his other contractors for a set fee. For Ray, Freddy is in equal parts boss, friend, and father trying to calm his teenage son.

Damon Herriman, the actor who portrays Freddy, says: “It’s very easy to get off side with Ray, but Freddy can get away with most things. Freddy feels protective of Ray and protected by Ray, but he’s also a little on edge always because he knows Ray has a hair trigger temper. Freddy is constantly trying to make sure that Ray stays calm.”

Herriman’s extensive credits in both Australia and the United States are a testament to his versatility and reflect his standing as one of Australia’s best character actors. The award-winning Australian actor has several massive projects being released this year.

Later this summer, Herriman will portray Charles Manson a second time for season two of Netflix’s award-winning series Mindhunter. He will also be seen starring opposite Mia Wasikowska in Judy and Punch, which debuted at the 2019 Sundance Film Festival, and The Nightingale, which also premiered at Sundance Film Festival. He has completed production on the Australian miniseries Lambs of God, in which he stars opposite Ann Dowd.

Herriman’s previous film credits include Down Under, The Little Death (AACTA Nomination for Best Lead Actor), Son of a Gun, Russell Crowe’s The Water Diviner, 100 Bloody Acres, The Square, Candy and The Big Steal. In 2008, Herriman won the Best Actor award at the St Kilda Film Festival for his performance in the short film Len’s Love Story.

On American television, Herriman is best known for his recurring role as “Dewey Crowe” in the critically acclaimed FX series Justified, also starring Timothy Olyphant. Other U.S. television credits include a recurring role in CBS’ Vegas, opposite Dennis Quaid, Breaking Bad, Wilfred, The Unit, Cold Case and the Vince Gilligan police drama Battle Creek. His series regular roles include the Starz cable drama Flesh and Bone, which received a 2016 Golden Globe® nomination for Best Limited Series or Motion Picture Made for Television, and Quarry for Cinemax.