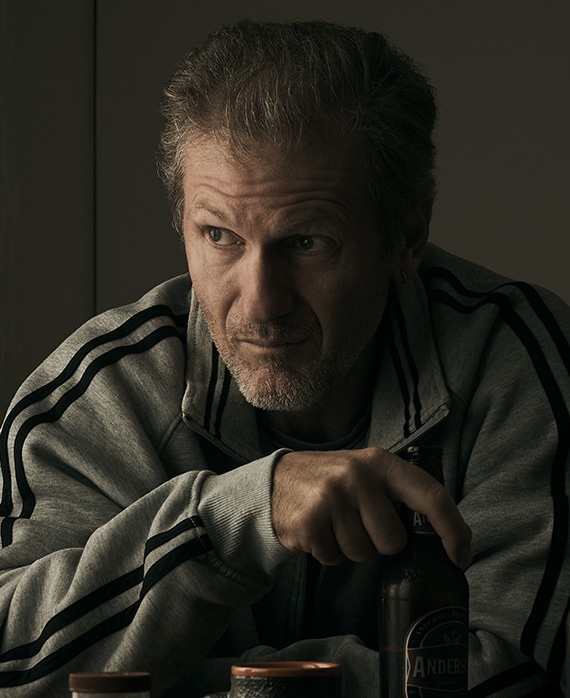 Ray is dedicated to Brittany and his older brother Bruce who is experiencing gradual reduction in mobility and coordination due to a motor neuron disease. Ray often visits Bruce, giving firm but unforced support. The last thing that Bruce wants is pity. Bruce was in a similar line of business to his little brother before his career was cut short, so part of his struggle is learning to accept not just the physical limitations, but the restrictions on being an active participant in the outside world.

Nicholas Cassim, who portrays Bruce, says: “I imagine that Bruce’s life was similar to his brother’s, on the wrong side of the law, but without the same level of intelligence and proficiency as Ray.” “Although Bruce is an older brother, I see him as being in a sense the younger brother, in that when they did ‘jobs’ together, Bruce wouldn’t have been as wily as Ray. Bruce was probably without much ambition in the world that they operated in, but I think they’re very close in that Australian male way of not being over demonstrative emotionally. They’re extremely loyal to each other.”

A graduate of Theatre Nepean, Nicholas Cassim has built up an impressive list of credits, including his upcoming role in Network Ten’s new series The Secrets She Keeps.

He is best known for his role as “Sergeant McCarthy” on the Seven Network’s long-running series Home and Away. Other television credits include Winter for the Seven Network, The Moodys and The Elegant Gentlemen’s Guide to Knife Fighting for Jungle Entertainment, The Outlaw Michael Howe for Cordell Jigsaw Productions, Underbelly: Razor for the Nine Network and Tricky Business. He’s appeared in films including Around the Block, Wish You Were Here and Dealing with Destiny.

Selected theatre credits include Noir for Darlinghurst Theatre, Elling and La Ronde for Belvoir and The Decameron and The School of Night for Old Fitzroy Hotel.