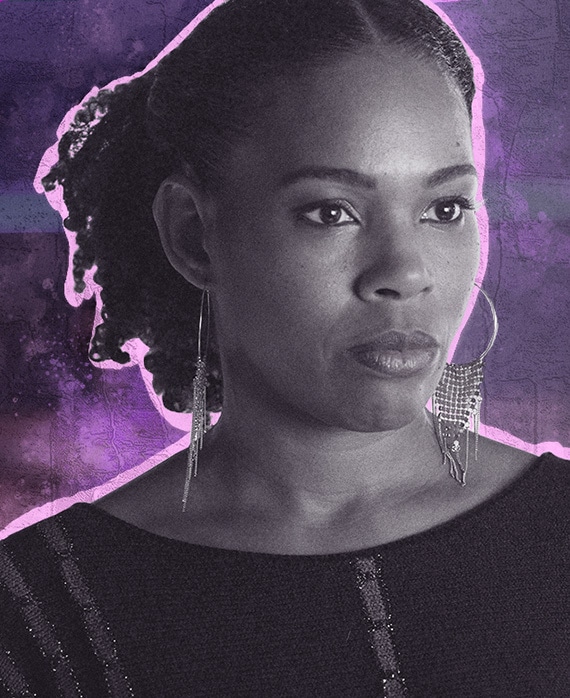 Angela Lewis plays Franklin's “Aunt Louie,” who, as Franklin’s right hand, had to step up in a big way to run the business while Franklin was recovering, and she came through. The hard work she’s put in is finally yielding some big returns, a reward that will hopefully keep her focused in season four, and stop her from making any new mistakes, like the ones from her recent past.

In addition to Snowfall, rising star Lewis has garnered many roles from some of the most illustrious Off-Broadway play productions to award-winning drama television series.

Born and raised in Detroit, Michigan, Lewis credits her drive and success to a village of family, friends and the public-school education she received. At the age of three, she desired to be an actress and soon became the entertainer of her family. Her very supportive parents provided her with opportunities to sing in various choirs as well as play saxophone and take ballet, tap, jazz and West African dance lessons, which molded her into a performer. To avoid the pitfalls of inner-city life, Lewis engrossed herself in her studies and extracurricular activities, which subsequently gave her intellectual growth and the perseverance she has today.

Lewis continued developing as an artist by being involved in the Readers Theater & Performing Arts Guild in high school under the tutelage of Tony Award®-winning teacher, Ms. Marilyn McCormick. After attending a student trip to New York City with McCormick, Lewis was compelled to make the move to the “City of Dreams” one day. The next stop however, as mandated by her parents, was college. Lewis majored in theater at the University of Michigan, and by her senior year, had gone from partial talent scholarships to a full ride. Lewis graduated with a bachelor’s degree in theater performance.

Upon graduating, Lewis moved to New York City to pursue her acting career. Her first major role in an Off-Broadway play production, History of the Word, gained her an equity card, her first agent and her first manager. During her tenure as a young, working actor (complete with a side hustle as a bartender and cocktail waitress) in most of New York’s illustrious playhouses, she built relationships and established herself in the theater community’s elite circle of artists. She also quickly began working as voiceover and commercial talent for brands such as Verizon, AT&T Wireless and McDonalds to name a few.

In 2011, Lewis landed a role in La Jolla Playhouse’s production of Milk Like Sugar. The play became the winner of the 2012 Obie Award® for Playwriting and 2011 San Diego Critics’ Circle Craig Noel Award for Outstanding New Play. It was there she met co-actor and husband-to-be J. Mallory McCree. Her life and career really began to flourish after that, and she gained her first television role on HBO’s critically acclaimed drama series, The Big C, in the role of Laura Linney’s nurse. It was a small appearance, but opened the door to a growing on-camera career, including a guest star role on NBC’s Law & Order: Special Victims Unit.

After two and half years of dating, Lewis and McCree married in August of 2014 in their hometown Detroit, Michigan. The happy newlyweds then packed their stuff and moved to Los Angeles to further pursue their film and television goals. Out the gate, Lewis booked back-to-back guest-starring roles on TNT’s The Last Ship and CBS’ Code Black before landing her series regular role in Snowfall.

Currently residing in Los Angeles with her husband and infant daughter, Lewis spends her time balancing work, life-partnership, motherhood and self-care. She donates to charities like Black & Missing and the ACLU, and stays healthy by practicing meditation, yoga, weightlifting and dance classes. Lewis is pesca-vegan, enjoys baking lactation snacks and wants the world to normalize breastfeeding. She also loves to dabble in arts and crafts.