Chase Milbrandt in "Moment of Silence" 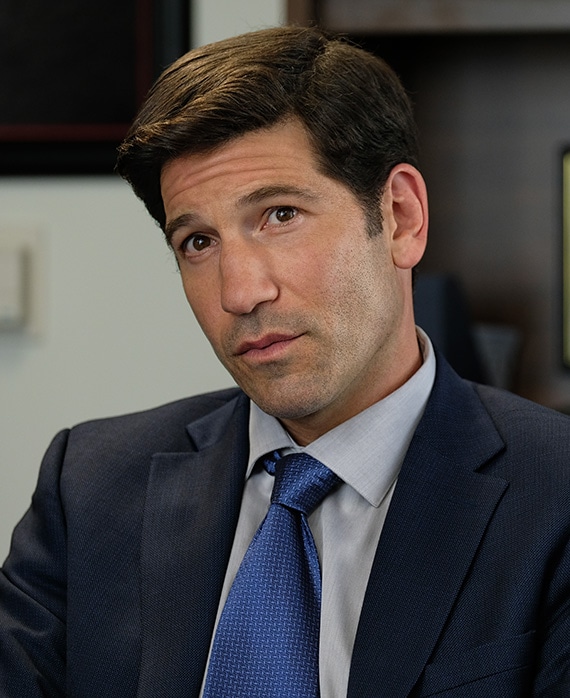 Bernthal was most recently seen in Taylor Sheridan’s Those Who Wish Me Dead opposite Angelina Jolie, which was released in May 2021. Bernthal will star in the highly anticipated Sopranos movie prequel The Many Saints of Newark. In November 2021, Bernthal will be seen in King Richard from director Reinaldo Marcus Green, starring alongside Will Smith. He recently wrapped production on Lena Dunham’s feature film Sharp Stick alongside Jennifer Jason Leigh. In addition, Bernthal co-produced and stars in the feature film adaptation of Small Engine Repair based on the award-winning stage production which he also produced and starred in.

In 2019, Bernthal starred in James Mangold’s Ford v. Ferrari alongside Christian Bale and Matt Damon. The film premiered at the Toronto International Film Festival to critical acclaim and received an Oscar® nomination for “Best Picture.” He also appeared in The Peanut Butter Falcon alongside Shia LaBeouf and Dakota Johnson. The film received the “Narrative Spotlight Award” at 2019 SXSW Festival and was nominated by the DGA for “Outstanding Directorial Achievement” in the First-Time Feature Film category.

In 2013, Bernthal starred in Martin Scorsese's The Wolf of Wall Street opposite Leonardo DiCaprio and Jonah Hill. The film was nominated for five Academy Awards® including “Best Picture.”

Alongside his father, Bernthal launched the production company, Story Factory, which has several projects in development. Up next, Bernthal will star and produce Showtime’s adaptation of American Gigolo.

In 2017, Bernthal played the role of “Frank Castle” / “The Punisher” in the Netflix spin-off series The Punisher based on the Marvel comic. The show’s second season debuted in 2019. His performance originated in the second season of Netflix’s Daredevil series. Additionally, Bernthal starred in HBO’s mini-series Show Me a Hero alongside Oscar Isaac, Jim Belushi and Winona Ryder.

Bernthal starred as “Shane Walsh” in AMC's The Walking Dead. Bernthal's extraordinary portrayal as a survivor of the zombie apocalypse marks another remarkable turn in a career defined by acclaimed and varied performances both on stage and on screen. The Walking Dead earned a Golden Globe® nomination for Best Drama Series, a Writers Guild of America nomination for Best New Series and recognition as one of AFI's “Ten Best Television Programs of the Year.” The series also set new records as the most watched drama series in basic cable history and has aired internationally in over 120 countries and 33 languages. Bernthal also starred as the lead in Frank Darabont's Mob City for TNT in 2013.

Bernthal was also part of the ensemble in the Tom Hanks and Steven Spielberg HBO miniseries The Pacific. The role required Bernthal to undergo boot camp training, as well as combat training with Marines. His other television work includes appearances on: Boston Legal, CSI: Miami, Law & Order Special Victims Unit, How I Met Your Mother and Without A Trace. His first series in a starring role was The Class, created by David Crane and directed by James Burrows.

During his college years, Bernthal studied at the prestigious Moscow Arts Theatre in Russia. While studying at MAT, Bernthal was discovered by the director of Harvard University's Institute for Advanced Theatre Training, at the American Repertory Theatre in Moscow. He was invited to study there and graduated with a M.F.A.

A veteran of more than 30 productions, Bernthal recently returned to his roots in the Rogue Machine Theatre's production where he produced and starred in Small Engine Repair. Bernthal earned a 2011 Ovation Award nomination for his performance, which had its New York premiere for MCC in 2013. Bernthal had previously starred in Neil LaBute's Fat Pig at the Geffen Playhouse. His other theater credits include Langford Wilson's Fifth of July at New York's Signature Theatre, the off-Broadway production of The Resistible Rise of Arturo Ui where Bernthal played “Ui” at the Portland Stage Company and This is Our Youth at the Studio Theatre in Washington, D.C. His love of theater led him to open his own non-profit theater company Fovea Floods in upstate New York.

Bernthal was a professional baseball player both in the U.S. minor leagues and European Professional Baseball Federation. He teaches boxing to at risk children, helping them to channel their issues into a sport which teaches them confidence and control. Bernthal also works to retrain pit bulls that have been abused, subsequently placing them in loving homes.