Abbi Miller in "The Ballad of Jesse Wheeler" 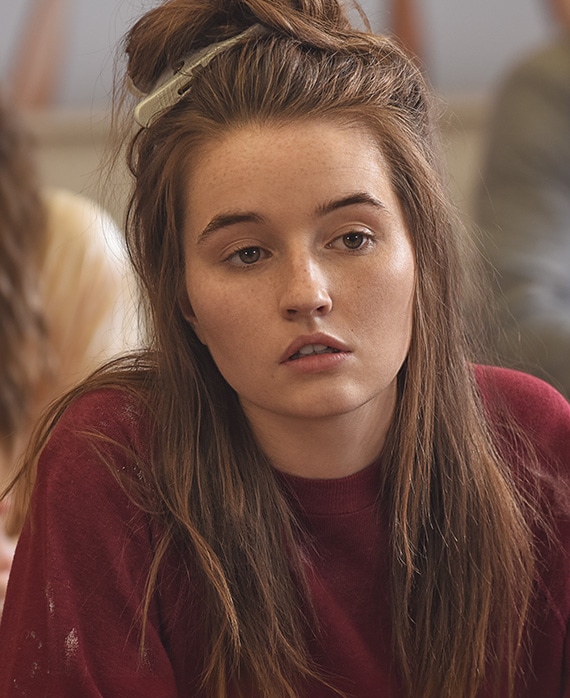 Kaitlyn Dever has amassed tremendous respect and admiration with her dynamic and impactful performances in film and television.

Dever starred in Netflix’s Unbelievable which debuted in 2019. Dever’s standout performance earned her nominations in the “Lead Actress in a Limited Series” category for both the Golden Globe® Awards and Critics’ Choice Awards, as well as a 2020 Television Critics Association (TCA) Award nomination in the “Individual Achievement in Drama” category. Additionally, the series was nominated for 2020 TCA Awards for “Outstanding Achievement in Movie or Miniseries” and “Program of the Year.” Unbelievable won a 2020 Peabody Award.

Dever starred in Olivia Wilde’s directorial debut Booksmart opposite Beanie Feldstein,which was released to critical acclaim following a successful world premiere at the 2019 SXSW Film Festival. Dever was recognized by the Hollywood Critics Association as the “2020 Breakthrough Artist Under the Age of 23” and was named an EE BAFTA Rising Star nominee. The film won the 2020 GLAAD Media Award for “Outstanding Film – Wide Release.”

Dever is currently in production on Hulu’s Dopesick opposite Michael Keaton. Upcoming, she will begin production on Ticket to Paradise opposite George Clooney and Julia Roberts, slated to release in 2022. Additionally, Dever will commence production on No One Will Save You, written and directed by Brian Duffield.

Dever will portray “Zoe Murphy,” the love interest of the title character, opposite Ben Platt who will reprise the role of “Evan Hansen,” in the film adaptation of the six-time Tony® Award-winning play Dear Evan Hansen. Dever will star next in the comedy series The Wildest Animals in Griffith Park created by Tyler Nilson and Michael Schwartz and executive produced by Margot Robbie.

In 2020, Dever voiced one of the three leads in the Audible Original When You Finish Saving the World alongside Jesse Eisenberg and Finn Wolfhard, directed by Eisenberg. She also co-starred in HBO’s satiric special Coastal Elites opposite Bette Midler, Dan Levy, Sarah Paulson and Issa Rae. Dever also appeared in Hulu’s anthology series Monsterland opposite Jonathan Tucker.

In 2019, Dever starred alongside Olivia Colman and Walton Goggins in The Orchard’s Them That Follow, an independent drama feature that premiered at Sundance Film Festival.

Dever can previously be seen in director and writer Lynn Shelton’s Outside In opposite Jay Duplass, Edie Falco and Ben Schwartz. The feature had its world premiere at the 2017 Toronto International Film Festival and was released globally on Netflix. Dever and Shelton’s relationship was a continuation from their work in the comedy-drama Laggies, in which Dever appeared alongside Keira Knightley, Chloe Moretz and Sam Rockwell. The film premiered at the 2014 Sundance Film Festival and Toronto International Film Festival.

In 2017, Dever took on the role of “Karen” in Detroit for Academy Award®-winning director Kathryn Bigelow, with an ensemble cast including John Boyega, Hannah Murray, Will Poulter and Jacob Latimore. Written and produced by Mark Boal.

In 2013, Dever played a supporting role in the coming-of-age feature The Spectacular Now starring Shailene Woodley and Miles Teller. Premiering at the 2013 Sundance Film Festival, the film garnered much critical acclaim. That same year, Dever delivered a powerful and pivotal performance in the critically acclaimed Short Term 12 opposite Brie Larson. Directed by Destin Daniel Cretton and based off his short film of the same name, the film first premiered at the 2013 SXSW Film Festival where it won the Grand Jury Prize for “Best Narrative” and the “Audience Award.” Dever was also highlighted as a “SXSW Breakout” for her performance.