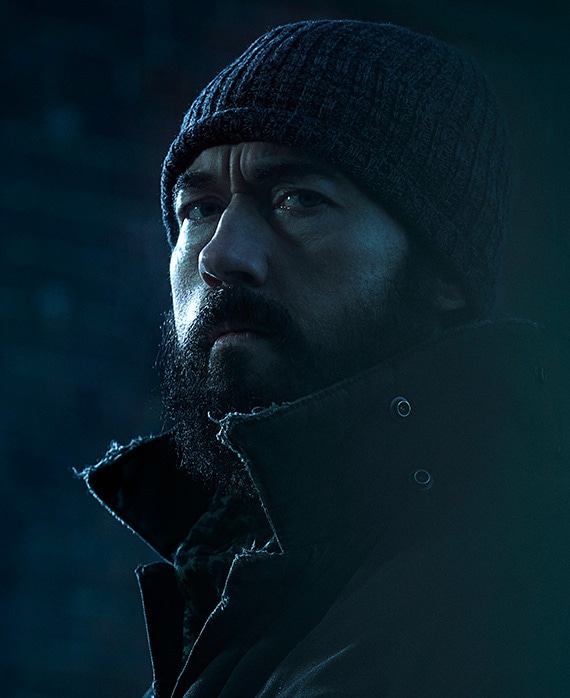 Fet finds himself trudging through the wilderness of North Dakota, tasked with finding a nuclear bomb to kill the Master. With Quinlan serving as both his half-human teammate and thorn in his side, Fet enlists the help of a tough but beautiful pioneer woman, Charlotte, who can show this city boy a thing or two about survival.

Canadian-born Kevin Durand has developed a versatile background, beginning in comedy and Broadway then transitioning into television and film, illustrating his ability to captivate a wide range of audiences. His films have grossed over $2.5 billion to date.

Durand was hand-selected by Guillermo del Toro for the role of “Vasiliy Fet” in The Strain, which reunited him with Lost executive producer and writer Carlton Cuse.

Durand can be seen alongside Craig Robinson and Josh Hutcherson in the upcoming comedic horror film Tragedy Girls, which premiered at the 2017 SXSW Film Festival.

Previously, Durand appeared in the independent thriller Dark Was The Night that premiered at the 2014 ScreamFest Film Festival and in Atom Egoyan’s thriller The Captive opposite Ryan Reynolds that premiered and was in competition at the 2014 Cannes Film Festival. Durand also received rave reviews for his performance in Atom Egoyan’s other feature, Devil’s Knot, which premiered at the 2013 Toronto International Film Festival. Film critic Jason Gorber declared his performance “the standout element of the film, this larger than life character is played to near perfection by Durand.”

Before his film career, Durand was voted one of Canada’s funniest new comedians. In addition, he originated the role of "Injun Joe" in The Adventures of Tom Sawyer on Broadway.

Durand is best known for his roles in such films as Fruitvale Station, which won both the Grand Jury Prize and Audience Award at the 2013 Sundance Film Festival, David Cronenberg’s Cosmopolis opposite Robert Pattinson, Screen Gems’ Resident Evil: Retribution, Shawn Levy’s Real Steel for DreamWorks opposite Hugh Jackman, Universal’s Robin Hood as "Little John" opposite Russell Crowe, James Mangold’s 3:10 to Yuma with Russell Crowe and Christian Bale, as "Fred Dukes" AKA "The Blob" in X-Men Origins: Wolverine alongside Hugh Jackman, Joe Carnahan’s Smokin’ Aces opposite Chris Pine, as well as his recurring role on History Channel’s hit series Vikings. Durand made his acting debut alongside Russell Crowe in Jay Roach’s Mystery Alaska.

He currently resides in Los Angeles.