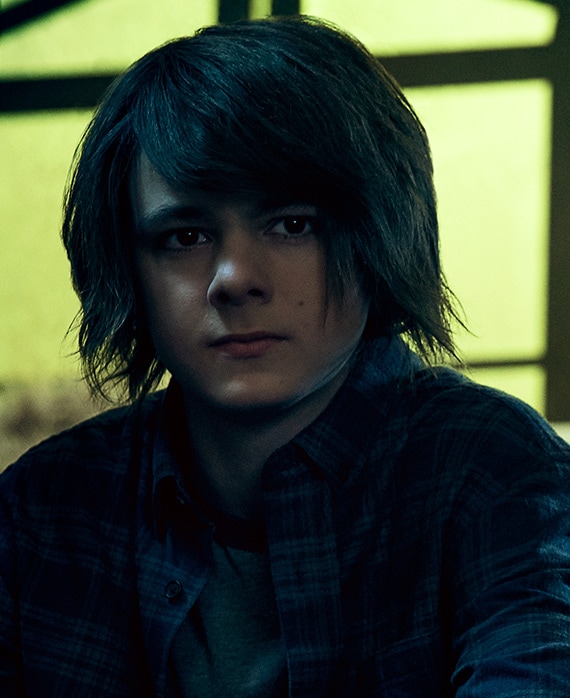 After triggering the nuke that began a global chain reaction, Zack is comfortable but lonely under the Master's watchful eye. He finds a desperately-needed friend in Abby, an orphan hired to be his servant. But as Zack takes a liking to her, it becomes apparent that even his budding feelings are under the Master's control.

As the Master continues to cultivate the boy's loyalty, Zack is put to the ultimate test when he finally comes face-to-face with his father.

At just 13 years of age, Max Charles is already an industry veteran, landing coveted roles on the big and small screens, and working with some of Hollywood’s most respected and acclaimed actors, writers and directors.

Most recently, this charismatic and endearing young talent was nominated as “Best Young Actor on a Television Series” at the 2016 and 2017 Saturn Awards for his role as "Zack Goodweather" on The Strain.

Charles got his start in television at the age of six when he appeared in an episode of True Blood. He then went on to appear in other series including Raising Hope, Hot in Cleveland, Constantine, and Emmy®-nominated The Neighbors as series regular "Max Weaver," and co-starred in the Hallmark Channel original holiday movie North Pole. Other notable television credits include a recurring role on Disney’s Lab Rats and NBC’s holiday special Elf: Buddy's Musical Christmas. Additionally, Charles continues to voice various characters on Family Guy, Adventure Time and American Dad. Charles also stars in three animated series, lending his voice to "Harvey Beaks" on Nickelodeon's Harvey Beaks, "Kion" in Disney’s Lion Guard, and "Sherman" in the DreamWorks Animation / Netflix series Mr. Peabody & Sherman.

Charles is no stranger to the big screen. In 2014 he had a supporting role in the Clint Eastwood directed movie American Sniper opposite Bradley Cooper. Charles also reprised his role of young "Peter Parker" in The Amazing Spider-Man 2 starring Andrew Garfield. Charles was also heard around the globe as the voice of the title character "Sherman" in the hugely successful DreamWorks animated film Mr. Peabody & Sherman. His other feature film credits include Angry Birds, The Three Stooges, Least Among Saints, White Space and The Last Survivors.

Born and raised in Dayton, Ohio, along with his three elder brothers, Charles now resides in Los Angeles. He is just like any young boy his age when not in production, spending time playing video games and basketball or skateboarding and riding his bike. On days off, Charles can also be found hanging out with his dog, Pip, who shared the screen with him in Spooky Buddies. During filming, Charles fell so in love with the three-month-old beagle puppy that he decided to adopt him.