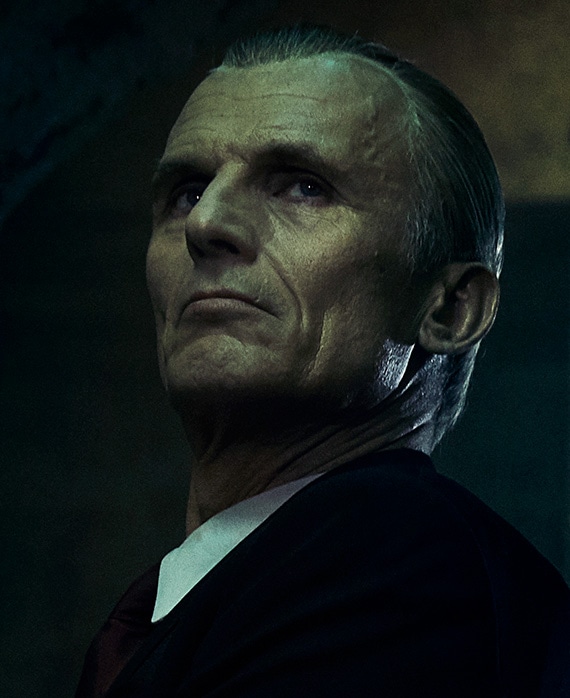 Now one-handed, Eichhorst is more cunning and dangerous than ever as he diligently carries out the final phases of the Master's plan for humanity. Additionally, his sights remain set on hunting down his old nemesis, Abraham Setrakian.

An artist of international range and reputation, Richard Sammel is fluent and has acted in English, German, French and Italian speaking roles. He has starred in some 40 films and 25 television projects for such directors as Quentin Tarantino, Guillermo del Toro, Luc Besson, Martin Campbell, Bertrand Tavernier, Claude Lelouche, Jean-Paul Rappeneau, Roberto Benigni, Dario Argento, McG and Michel Hazanavicius. He has acted, danced and directed for the stage in theaters all over Europe and Canada.

The prolific actor recently completed three films: Outside the Box, a comedy and the second feature from German director Philip Koch; Le Confessioni, a political farce from Italian director Roberto Ando in which Sammel plays the German minister of finance; and A Day Like a Week, a supernatural thriller in which Sammel stars opposite Armand Assante for director Kader Ayd. Sammel also returned for the seventh season of The French Village, an enormously popular French television series, in which he has had a leading role since its premiere.

Sammel made his professional acting debut in 1981 on stage in Hildesheim, Germany. From 1983 he worked in France, where his breakthrough came in 1987, with an acclaimed performance in Catch. Beginning in 1989, he worked in Rome with theater director Giorgio Barberio Corsetti and met Susan Strasberg, who assisted him in securing his film debut, the lead role in Il Piacere Delle Carni. In 1993 Sammel moved to Paris and landed the lead role in the musical film version of the Brecht-Eisler opera The Lindbergh’s Flight.

An indelible performance in Quentin Tarantino’s Inglourious Basterds in 2009 brought Sammel international recognition. In 2012, he won “Best Actor” at the Syracuse International Film Festival for his performance in Ruggero Dipaola’s Apartment in Athens.

Sammel was born in Heidelberg, Germany. He studied music, especially the violin, and then went on to follow his true passion, acting. He studied both music and acting in Hildesheim, Germany, acting and directing in Aix en Provence, and acting with both Susan Strasberg and Francesca de Sapio in Rome. He is drawn to roles that require physical play, rhythm and timing, a reflection of his dance training; and those that require a deep emotional inner life, a reflection of his intense training in method acting. He lives in Paris and Berlin.