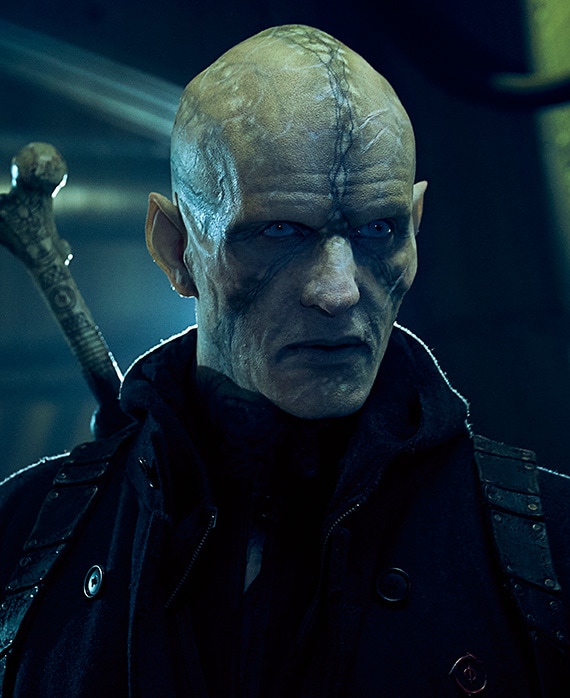 Rupert Penry-Jones stars as “Quinlan,” who is neither human nor strigoi.

With an unwavering focus on killing the Master, Quinlan is driven by his sense of destiny as he and Fet scour the countryside for the ultimate weapon: a nuke. Through explorations of Quinlan's past, his complex human half will come more into focus. And in his journey with Fet, he will be forced to learn the hardest lesson of all: perhaps he cannot do this alone.

Rupert Penry-Jones is most often recognized for the roles of “Adam Carter” on the BBC One series Spooks, “Clive Reader, QC” on BBC One’s Silk and “DI Joseph Chandler” in the ITV mystery series Whitechapel.

Penry-Jones made his London stage debut at the Hackney Empire theatre in 1995 playing “Fortinbras” to Ralph Fiennes' “Hamlet” in a production of Hamlet. He went on to appear in Sweet Panic, The Paper Husband, Chips with Everything and The Play About the Baby. In 1999 he joined the Royal Shakespeare Company playing the title role in Don Carlos, which won him the Ian Charleson Award, and “Alcibiades” in Timon of Athens.

On television, Penry-Jones played barrister “Alex Hay” in North Square, “Donald McLean” in Cambridge Spies, “Grimani” in Casanova and “Adam Carter” in Spooks, for which he won an ITV3 Crime Thriller Award in 2008. He went on to star in Burn Up, The 39 Steps, Black Sails and as “Quinlan” in The Strain.