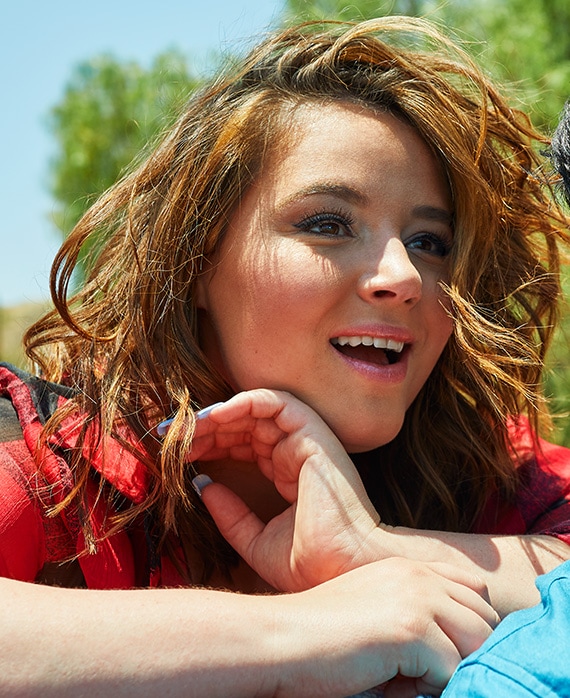 Kether Donohue plays “Lindsay,” who is down for literally anything, making her the perfect wing-woman and – more often than not – enabler. Lindsay and Gretchen have been best friends their whole lives; they've spent many a night drunkenly partying and fueling each other's bad impulses. Having just gotten out of a failed marriage, Lindsay is on her own for the first time, struggling to balance her new life as a professional woman with her predilections for debauchery.

A proud native New Yorker and coined “the unstoppable Kether Donohue” by Variety, Donohue has received critical acclaim for her fearless performances in film, television and theatre. She has worked with a remarkable list of Oscar®, Emmy®, and Tony Award-winning and nominated directors including Barry Levinson, Sam Mendes, Jason Moore, James Burrows, Stan Lathan, and Paul Feig.

For her performance as “Lindsay,” Donohue earned a 2016 Critics’ Choice Award nomination in the Best Supporting Actress category. She starred in FOX’s live Emmy-winning musical presentation of Grease Live, in which she played “Jan,” one of The Pink Ladies, opposite Julianne Hough and Vanessa Hudgens.

In film, Donohue starred in The Bay, Boy Wonder and Pitch Perfect in which she played sharp-tongued “Alice.” TV roles include Open Books, Saving Jason, The Carrie Diaries, Royal Pains, The Mindy Project, Ringer, Perfect Couples, I Just Want My Pants Back and Hope & Faith.

A graduate of Fordham University with a concentration in Film, Donohue has co-produced and starred in several films including Aaron Bacon, Altered States of Plaine and Over the GW, which was used to promote social change when it was cited in a United States Congressional Hearing on Child Abuse and Deceptive Marketing by Residential Programs for Teens. She also wrote, directed and starred in the short film, The Babydaddy, an autobiographical narrative about the relationship between a 16-year-old girl and her ill Vietnam veteran father.

Donohue is also an accomplished and passionate voice-actress known for her remarkable range of unique character voices. Her voice has been heard on several animations as well as television and radio commercials/promos.