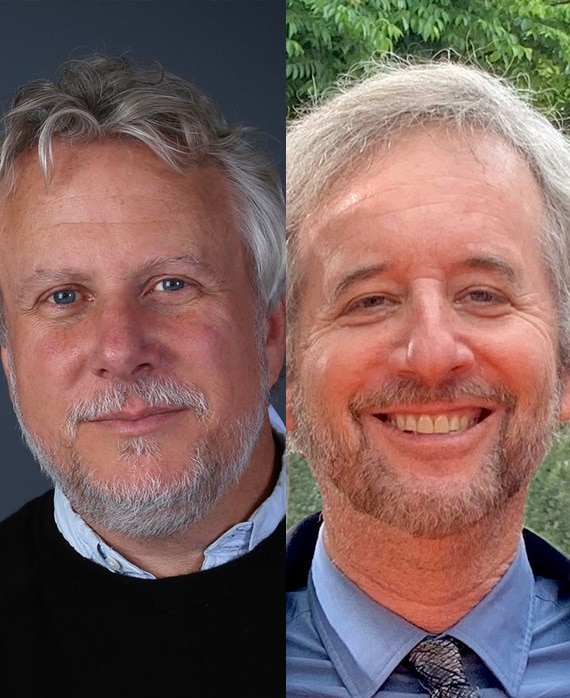 Larry Karaszewski met Scott Alexander as freshman roommates at USC’s School of Cinema. On a whim, they wrote a screenplay during their senior year, which sold a week after graduation.

The pair are best known for writing very unusual biopics with larger-than-life characters. They wrote the highly-acclaimed Ed Wood, for which they were nominated for Best Screenplay by the Writers Guild. They followed with The People vs. Larry Flynt, for which they won the Golden Globe® for Best Screenplay, as well as a special Writers Guild award for civil rights and liberties. They scripted the extremely postmodern Man on the Moon, the life story of Andy Kaufman. They wrote Big Eyes, the strange-but-true story of Margaret and Walter Keane, for which they received an Indie Spirit Best Screenplay nomination. And for their first television project, they created the hit miniseries The People v. O.J. Simpson: American Crime Story, for which they won an Emmy®, Golden Globe, PGA and WGA Award for Best Limited Series. Their newest film, the tale of comedian Rudy Ray Moore, was the celebrated Dolemite Is My Name.

Other than biopics, Karaszewski and Alexander are quite eclectic. They wrote the hit Stephen King adaptation 1408, they produced the Bob Crane biopic Auto Focus and they wrote and directed the comedy Screwed. They have also written numerous family films, including Problem Child, Problem Child 2, Agent Cody Banks and Goosebumps.

Karaszewski, born and raised in South Bend, Indiana, worked as a film critic for an NBC affiliate’s nightly news program, and wrote and directed Beyond Our Control, a weekly half-hour satirical television show. He is an active Los Angeles cineaste and is the Vice President of the Academy of Motion Pictures Arts and Sciences. His humorous commentaries on cult movies can be seen at TrailersFromHell.com.

Alexander, a native of Los Angeles, started his Hollywood career toiling on low-budget horror films as a music editor. As a director, his work has appeared on MTV and Nickelodeon. He also wrote for HBO’s Tales from the Crypt and the television series Monsters, which he directed. Alexander is a mentor in the USC School of Cinema and has served four terms on the Writers Guild’s Board of Directors. He has volunteered as a Sundance Writing Lab advisor numerous times and teaches at writing workshops around the world. Alexander is married with three children.