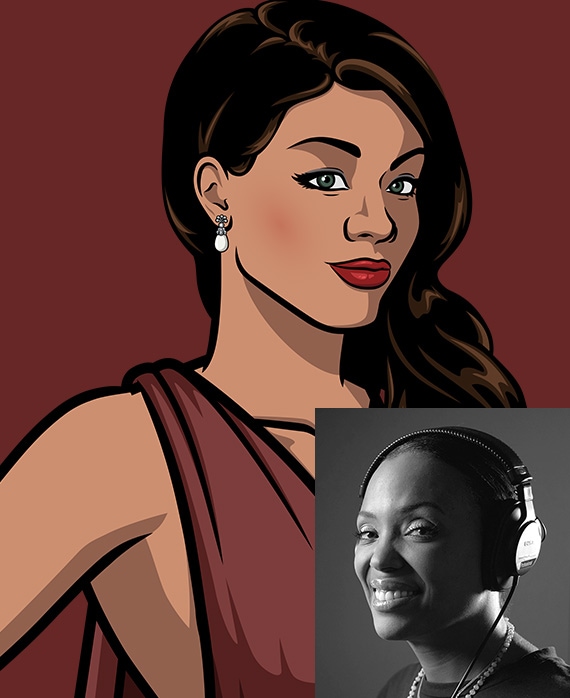 Voiced by Aisha Tyler, Lana’s perfect marriage to Robert, the multi-millionaire, is starting to show some cracks. She tries to confide in Archer, but he’s more interested in teasing her than helping. When Robert becomes more involved in The Agency’s affairs, Lana’s real husband also becomes her work husband. Now, Lana must try to avoid Robert while also avoiding the enemy’s bullets.

Tyler is an award-winning director, actor, comedian, bestselling author, podcaster and activist. In addition to her work on Archer, she voices a character in the animated series Monsters at Work for Disney+. She was a series regular on the long-running CBS show Criminal Minds, for which she directed two episodes. Tyler continues to host the CW’s improv show, Whose Line is it Anyway?, and is also an entrepreneur who launched a line of premium, bottled cocktails in 2020 that she personally created and developed, called Courage+Stone. The company grew over 600% in its first year.

Tyler was a co-host for seven seasons of CBS’ Emmy®-winning daytime show The Talk, which she departed in September 2017 to focus more on acting and directing. She then hosted her own nighttime talk show, Unapologetic on AMC, which focused on female-centric issues, particularly informed by current social and political climates.

Tyler is remembered for her character arc on Friends, where she was the first African-American to have a long-standing role on the show.

Her feature film-directing debut, the thriller AXIS, premiered in 2017 and won the Outstanding Achievement in Feature Filmmaking award at the 2017 Newport Beach Film Festival, then had a theatrical run at Arclight Hollywood, Landmark New York City and Drafthouse in Austin. Tyler recently directed an episode of Fear the Walking Dead. She continues to direct for television and will direct a feature-length horror film in Galway, Ireland in summer 2021.

A San Francisco native, Tyler graduated from Dartmouth College with a degree in Government and Environmental Policy. An avid gamer and passionate advocate (and occasional adversary) of the gaming community, Tyler’s voice can be heard in the video games “Halo: Reach,” “Gears of War 3” and “Watch Dogs.” She is a board member of Planned Parenthood and is an advocate for causes including the International Rescue Committee, Family Violence Prevention Fund, Doctors Without Borders and more.

Tyler is a bourbon and hard rock fan, a snowboarder and sci-fi obsessive.