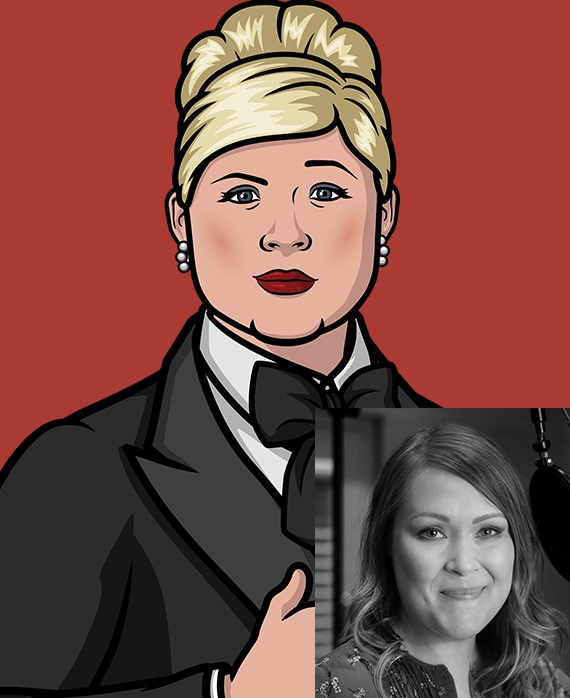 Pam Poovey, voiced by Amber Nash, has worn many hats for The Agency: Human Resources manager, drift car racer and branding officer, to name a few. She hopes that her myriad of skills will be recognized because if they aren’t, she may have to form her own breakaway country – The Republic of Pamistan, where the only rule is: F the rules!

Nash found her way to the entertainment industry in a rather unique way. A native of Lilburn, Georgia, she loved making her parents, sister and classmates laugh as a child. After high school, she enrolled at Georgia State University where she earned a Bachelor of Science in Psychology. It was during her time at Georgia State that Nash saw her first improv show and immediately signed up for classes. Though she was excited about the creative outlet improv brought to her life, after college she put her degree to use and worked for the State of Georgia at a Wilderness Camp for troubled teens. After a few years of using her skills to make a difference in the lives of the campers, she made the decision to pursue acting full time.

In 2004, Nash started performing improv regularly as an ensemble member at Dad's Garage Theatre in Atlanta, where she also served as Education Director. She also lent her talents to a local troupe called Laughing Matters and continued to hone her craft by doing voiceover work for the local radio station. Through her work at Dad’s Garage, Nash caught the eye of Matt Thompson and Adam Reed of Floyd County Productions who would forever change the course of her career.

Nash got her start in the world of television voiceover when Thompson and Reed cast her in their Adult Swim series Frisky Dingo, where she voiced “Val” and a number of other characters. That work led to an offer to voice “Pam Poovey” on Archer, a series that has since been honored with two Primetime Emmy® Awards including Outstanding Animated Program, a Critics’ Choice Television Award for Best Animated Series and a GoldDerby TV Award, to name a few. Nash’s character quickly became a fan-favorite, has garnered a lot of buzz and was even referred to as the “real hero of Archer” by BuzzFeed.

In addition to her voiceover work, Nash also explored a new medium with a role in the web series Hart of America, a performance which earned her an Indie Series Award nomination for Best Actress in Comedy. She has also stayed busy teaching, creating and writing shows, performing in thousands of improv shows and touring all over the United States, Canada, Europe and Australia. She has worked with Second City in Atlanta at the Alliance Theatre and for Norwegian Cruise Lines. Nash also collaborated with Dad’s Garage and a group of performers with special needs on a short film project called That Was Awesome.

She will continue her foray into the film world as the lead in the indie comedy How to Ruin the Holidays, alongside Colin Mochrie, Aisha Tyler, Henry Zebrowski and special needs actor Luke Davis. Written by Nash’s husband, Kevin Gillese, the movie offers a hilarious take on love, disability and those family gatherings that test your patience. It is set to begin production later this year.

When she is not busy acting, Nash loves to travel. She is also an amateur interior decorator and recently restored an old camper with her father which became her backyard guest house. She is passionate about animals and serves as a board member for Project Chimps, a Georgia-based sanctuary for retired research chimpanzees. Nash resides in Atlanta with her husband and their beloved pets, a brindle pitbull named Carol and a cat, Rubby Chuthers.