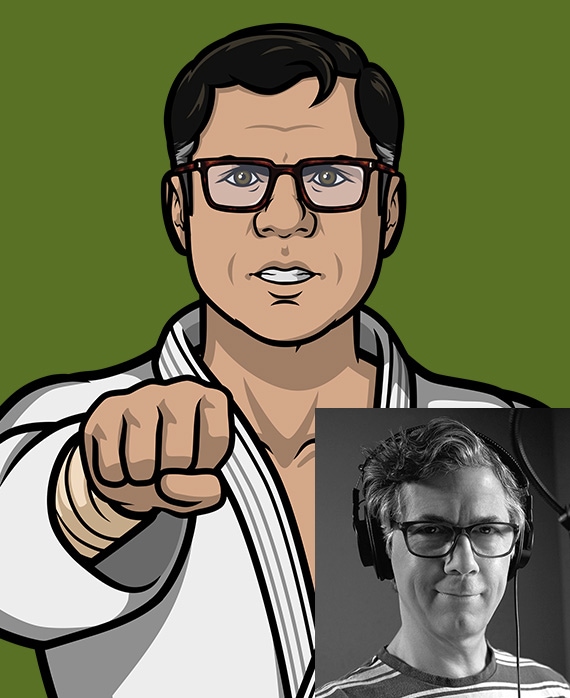 Cyril Figgis, voiced by Chris Parnell, had a hand in saving the world last season, but now struggles between the dangerous life of a spy and the security of being The Agency’s know-it-all accountant. With the arrival of IIA and all their amazing charts and graphs, Cyril wonders if his skills will ever be recognized at The Agency. Perhaps his talents would be better appreciated elsewhere… Probably not.

Parnell is widely recognized for his work as a cast member of Saturday Night Live from 1998-2006, where he was a part of many memorable sketches and video shorts. He also played the recurring role of "Dr. Leo Spaceman” on seven seasons of NBC’s 30 Rock and played "Fred Shay” on over three seasons of ABC’s Suburgatory.

In addition to his work on FXX’s Archer, Parnell is the voice of many animated characters including “Jerry” on Adult Swim’s Rick and Morty, "Mr. Peabody" on DreamWorks TV Animation’s The Mr. Peabody & Sherman Show for Netflix, “Snoot” on DreamWorks TV Animation’s The Dawn of the Croods for Netflix, “Migs” on Disney’s Elena of Avalor and various characters on the PBS animated series Nature Cat and WordGirl. In 2016, he appeared on Inside Amy Schumer, Brooklyn Nine-Nine, Another Period and The Spoils Before Dying. Parnell can currently be seen in the Freeform series Grown-ish, ABC’s Black-ish spin-off, as “Dean Parker,” and also in the CBS series Happy Together as “Wayne.”

Parnell’s previous film work includes Life of the Party, Battle of the Sexes, Sisters, Anchorman 2: The Legend Continues, The Five-Year Engagement, 21 Jump Street, Walk Hard: The Dewey Cox Story, Hot Rod and Anchorman: The Legend of Ron Burgundy. He had his feature film debut in 1996 in Jingle All the Way, playing a toy store salesman opposite Arnold Schwarzenegger. He can most recently be seen in Netflix’s Finding ‘Ohana.

Parnell is originally from Memphis, Tennessee and studied acting at the North Carolina School of the Arts.