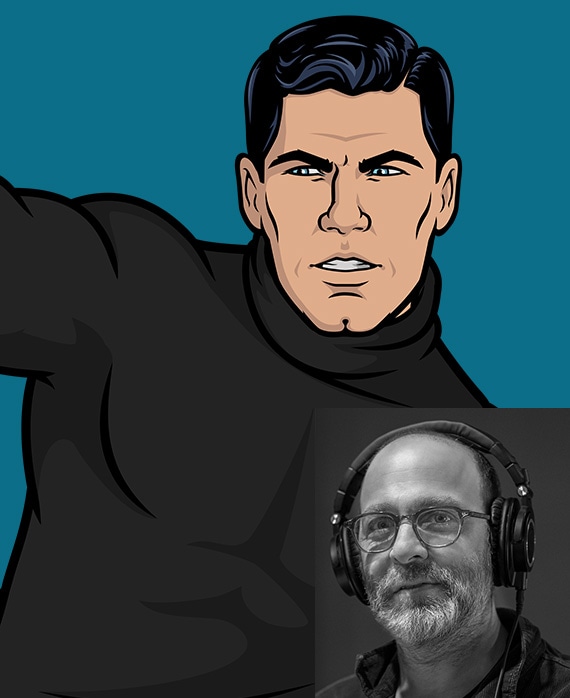 Fresh off the heels of saving the Earth from a nuclear catastrophe, the world’s greatest spy is back! Armed with his tacti-cane, Archer, voiced by H. Jon Benjamin, must face a new threat in the form of IIA. With his charts and spreadsheets, IIA’s leader Fabian Kingsworth threatens to destroy everything fun and cool about being a spy. Archer must stop IIA at all costs or risk becoming boring like Cyril… Yuck!

Born in Worcester, Massachusetts, Benjamin has garnered an extensive list of credits as a writer, producer and actor in some of television’s most entertaining series.

In addition to starring as the title role of “Sterling Archer” in FXX’s Emmy®-winning animated hit Archer, which earned him a 2010 Emmy nomination for Outstanding Voice-Over Performance, he also voices the lead character of “Bob Belcher” in FOX’s Bob’s Burgers.

Benjamin is perhaps best known for providing the voice of “Dr. Katz’s” lazy son “Ben” in Comedy Central’s animated hit series Dr. Katz, Professional Therapist from 1995-1999. In 2006, he co-created (with David Cross) the Comedy Central animated series Freak Show and provided the voice of “Tuck.” In 2009, Benjamin teamed up again with the network as a writer and co-producer of Important Things with Demetri Martin, a sketch comedy show in which he appeared as numerous characters. Benjamin also created and starred in Comedy Central’s Jon Benjamin Has a Van, which was nominated for a 2012 Writers Guild Award for Best Comedy/Variety Series.

Benjamin most recently appeared in Wet Hot American Summer: Ten Years Later and Master of None. His other credits include Home Movies for Cartoon Network, Family Guy for FOX and Assy McGee, Aqua Teen Hunger Force and The Venture Bros. for Cartoon Network’s Adult Swim.