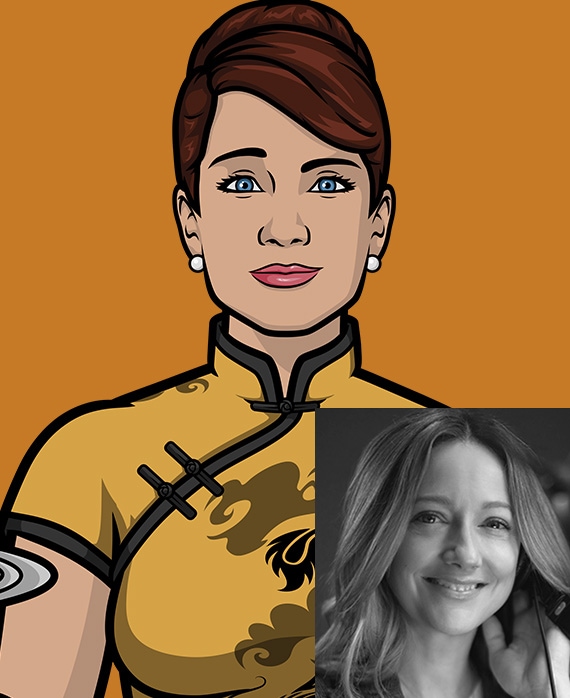 Cheryl/Carol Tunt, voiced by Judy Greer, is Malory’s assistant who just can’t stop herself from breaking the phone* or lighting a trashcan on fire. While this makes her a terrible assistant, the rest of the gang recognizes her unique role as an agent of chaos. Put her in a funny hat and drop her into any situation and wait for a spectacular failure.

*In her defense, that ladybug was asking for it.

Greer’s career in both film and television has been extremely prolific, with her appearing in over 100 roles to date. In the past three years alone, Greer has appeared in 16 feature films including Clint Eastwood’s The 15:17 to Paris, Marvel’s Ant-Man and the Wasp opposite Paul Rudd, 20th Century Fox’s War for the Planet of the Apes, the independent film Wilson opposite Woody Harrelson and Laura Dern, and Janicza Bravo’s Lemon alongside Brett Gelman and Michael Cera.

On the television side, Greer currently stars opposite Jim Carrey and Catherine Keener on the Showtime series Kidding. For the past 11 years, she has voiced the role of “Cheryl/Carol” on FXX’s Emmy®-winning animated comedy Archer and now also voices the lead role of “Luna” on the PBS Kids show Let’s Go Luna. Previously, Greer starred in the FX comedy series Married opposite Nat Faxon and has recurred on Netflix’s Arrested Development, Hulu’s Casual, CBS’ Two and a Half Men and Showtime’s Masters of Sex.

Other television credits include FOX’s American Dad, ABC’s Modern Family, IFC’s Portlandia, CBS’ The Big Bang Theory and How I Met Your Mother, FX’s It’s Always Sunny in Philadelphia, Netflix’s BoJack Horseman and Lady Dynamite, Showtime’s Californication and USA’s Royal Pains. In 2012, Greer made her Broadway debut opposite Katie Holmes in Dead Accounts and in 2014, she released her first book, I Don’t Know What You Know Me From: Confessions of a Co-Star.

In 2018, Greer made her feature film directorial debut with A Happening of Monumental Proportions. Produced by Artists First and Depth of Field, AHOMP stars Common, Bradley Whiteford, Allison Janney, Jennifer Garner, Anders Holm, Katie Holmes, Rob Riggle and Storm Reid. The film premiered at the Bentonville Film Festival in May 2017 where it won the Audience Spotlight Award. Previously, Greer directed an AOL original short that documents the practice of Transcendental Meditation and how it has changed the lives of teachers and students who learned the practice from the David Lynch Foundation.