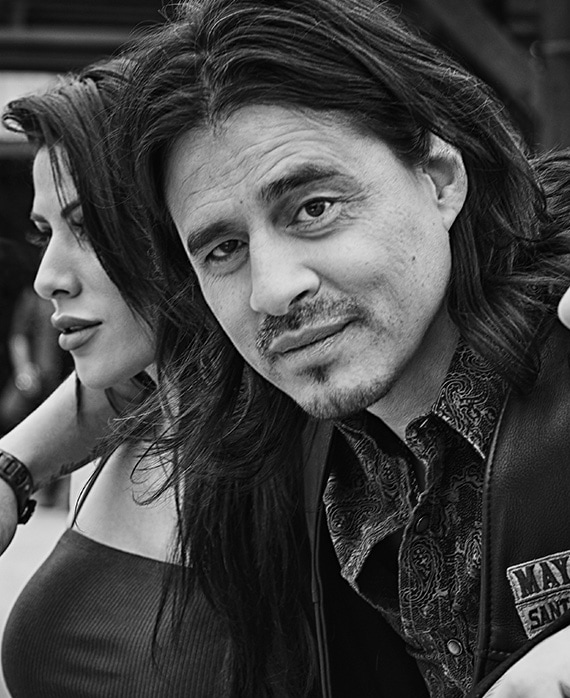 Antonio Jaramillo stars as “Michael ‘Riz’ Ariza,” El Secretario and full-patch member of the Mayans M.C., Santo Padre Charter. A Santo Padre local whose broken upbringing on the border made him well-equipped to navigate the outlaw world. Riz loves his hair as much as his motorcycle.

Jaramillo was born in Tijuana, Mexico to humble beginnings. In his mid-20s, he came across the writings of Anton Chekhov and later Arthur Miller and Tennessee Williams and fell in love with their work. The instant he was introduced to theater, his life shifted and he discovered a passion that would become his life calling.

In 2004, while living and working at a restaurant in Orange County, Jaramillo received an offer from the prestigious Geffen Playhouse to undertake several understudy roles in their production of Richard Greenberg’s Take Me Out. This prompted him to move to Los Angeles and fully pursue his acting career. In 2005, he began to surface on the small screen in popular shows like Veronica Mars and Charmed. He also had recurring and series regular roles in Meet the Browns, Gang Related, TNT’s hit drama Dallas, Devious Maids and Shades of Blue as “Miguel Zepeda” opposite Jennifer Lopez. Other notable television credits include Lucifer, Rosewood, CSI: Cyber, Arrested Development, The Mentalist, CSI: Crime Scene Investigation, Burn Notice, Outlaw, CSI: Miami, SEAL Team and The Rookie.

Jaramillo’s film credits include La Linea opposite Esai Morales, Danny Trejo, Andy Garcia and Ray Liotta. His film breakout performance came in 2012 when he co-starred in Oliver Stone’s violent crime thriller, Savages, alongside Benicio Del Toro, Salma Hayek and Demian Bichir. Other film credits include The Hungry Woman, The Da Vinci Treasure and Kill the Dictator. Jaramillo’s most recent film work was in Knate Lee’s Cardboard Boxer, in which he co-stars with Thomas Haden Church, Terrence Howard and Boyd Holbrook.

A proud ensemble member of the prestigious Antaeus Theatre Company, Jaramillo continues to hone his acting skills and expand his theater studies. His favorite stage moments have been playing the lead role in the west coast premiere of Stephen Adly Guirgis’ dark comedy Our Lady of 121st Street, “Konstantin” in Anton Chekhov’s The Seagull and “Jacques Casanova” in Tennessee Williams’ Camino Real. He recently appeared in Nilo Cruz’s Pulitzer Prize-winning play Anna in the Tropics and Patrick Marber’s Three Days in the Country.

Besides acting, Jaramillo enjoys music, boxing, playing tennis and spending as much time as possible with his children. He gravitates to anything in the arts, including literature, painting and architecture. Having spent many years living in an orphanage, Jaramillo is a strong advocate of charities and programs that help children.