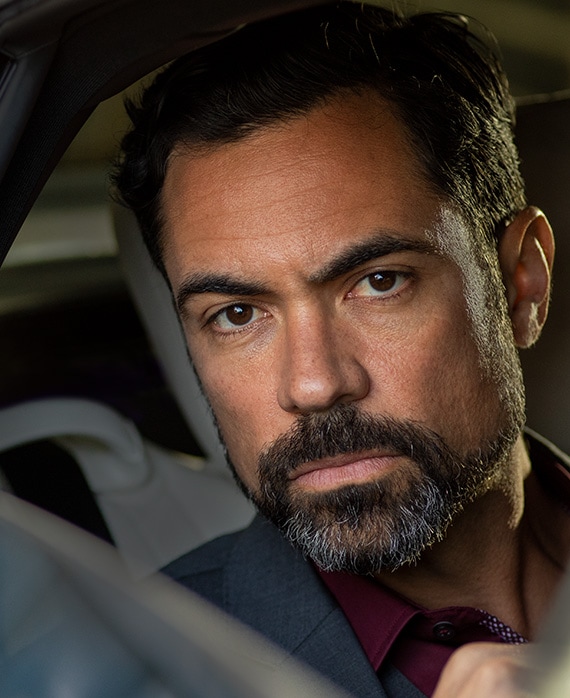 Danny Pino stars as “Miguel Galindo,” the son of Galindo Cartel founder, Jose Galindo. Still grappling with the loss of his mother, Miguel struggles to keep his business and family intact.

Pino is a versatile actor who has enjoyed success in film, theater and television. He most recently starred in the thriller Fatale opposite Hilary Swank and is slated to star in the upcoming film adaptation of Dear Evan Hansen alongside Amy Adams and Julianne Moore. Prior to Mayans M.C., Pino starred in Robert and Michelle King’s critically acclaimed CBS series, BrainDead, opposite Tony Shalhoub, and the police procedural Gone. In 2015, he wrapped his final season of Law & Order: Special Victims Unit, after playing fan favorite “Detective Nick Amaro” for multiple seasons. He may be best known for his seven seasons starring as the laconic “Detective Scotty Valens” on the CBS series Cold Case.

Pino’s feature film credits include the thriller Across the Line: The Exodus of Charlie Wright, opposite Aidan Quinn and Andy Garcia, Across the Hall for Universal and Guillermo Arriaga’s directorial debut The Burning Plain, an ensemble drama featuring Charlize Theron, Jennifer Lawrence and Kim Basinger. He portrayed the iconic Desi Arnez in the biopic Lucy and starred opposite Tim McGraw as a Wyoming horse-wrangler in Flicka.

Recurring and guest appearances include Shonda Rhimes’ Scandal for ABC, the Netflix hit One Day at a Time, portraying sociopath “Armadillo Quintero” on the acclaimed series The Shield and on USA Network’s long running series, Burn Notice. On stage, Pino appeared in Key Largo opposite Andy Garcia at the Geffen Playhouse (Los Angeles). He has worked on London’s West End in the Wyndham’s Theatre production of Up for Grabs with Madonna and in the Public Theater’s New York Shakespeare Festival productions of The Winter’s Tale and Measure for Measure.