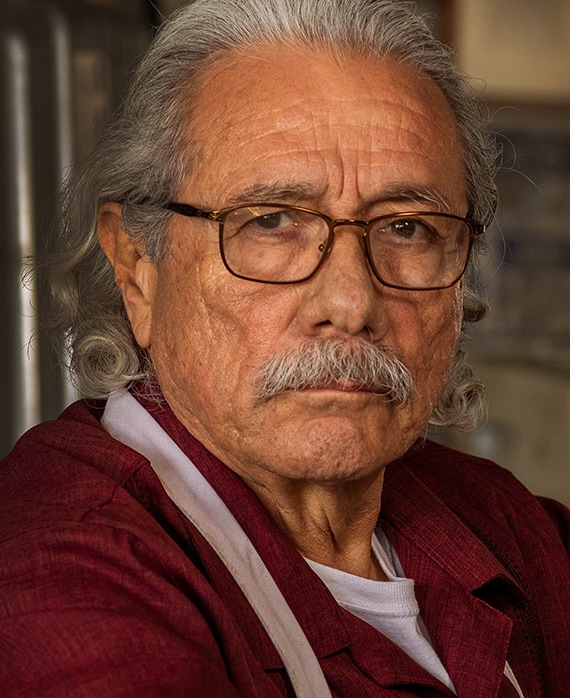 Edward James Olmos stars as “Felipe Reyes,” the once-strong patriarch of the Reyes family. After coming face-to-face with the darkness within his sons, Felipe is left despondent at the realization he’s failed them. But a new person in his life re-kindles his paternal nature and desire to reengage with life.

Olmos has achieved extraordinary success as an actor, producer and humanitarian. The Tony®, Emmy® and Academy Award®-nominated actor is probably best known to young audiences for his work on the SyFy television series Battlestar Galactica as the iconic “Admiral William Adama.” Although the series kept the actor busy during its run from 2003 through 2009, it didn’t stop him from directing the HBO movie Walkout in 2007, for which he earned a DGA Nomination in the Outstanding Directorial Achievement in Movies for Television category.

Olmos’ career in entertainment spans more than 50 years. In that time, he created a signature style and aesthetic that he applies to every artistic endeavor, often grounding his characters in reality and gravitas. His dedication to his craft has brought him attention across the industry and with audiences worldwide.

Originally a musician, Olmos branched out into acting, appearing in many small theater productions until portraying the iconic “El Pachuco” in Zoot Suit. The play moved to Broadway and Olmos earned a Tony nomination for the role which he reprised in the 1981 film version.

Olmos went on to appear in the films Wolfen, Blade Runner and The Ballad of Gregorio Cortez before starring in one of his most memorable roles, that of “Lieutenant Martin Castillo” in the iconic ‘80s television series Miami Vice opposite Don Johnson and Philip Michael Thomas. During his time on the Michael Mann series, Olmos earned two Golden Globe® and Emmy Award nominations, resulting in a win from each.

In 1988, he was nominated for an Academy Award and won the Golden Globe for his portrayal of “Jaime Escalante” in Stand and Deliver. He directed and starred in his first motion picture, American Me, in 1992.

Olmos’ passion for the arts grows every year, but he never forgets to give back to the communities that support him. He is an international advocate, spokesman and humanitarian working with organizations such as Thank You Ocean, Project Hope Foundation, Children’s Hospital of Los Angeles, The Boy’s and Girl’s Club of America, The River Keepers, Dr. Andros’ Diabetic Foot Global Conference and he speaks up to 150 times a year in schools, universities and corporations.

Other credits as an actor include the motion pictures My Family/Mi Familia; Selena, which was a breakout film for Jennifer Lopez; and In the Time of Butterflies, in which he played Dominican Republic dictator Rafael Leónidas Trujillo. In television, he is bringing gravitas to Mayans M.C. He enjoyed a recurring role as U.S. Supreme Court Justice “Roberto Mendoza” in the NBC drama The West Wing, portrayed a widowed father in the PBS drama American Family: Journey of Dreams and Dexter. He directed the YouTube phenomena “The Short Film BP Doesn’t Want You to See,” featured on Larry King/CNN.

Between 2019 and 2020, his film releases included Windows on the World, which he executive produced and starred in; Walking with Herb; Monday Nights at Seven, and he produced, directed and starred in the all-star cast of Devil Has a Name.