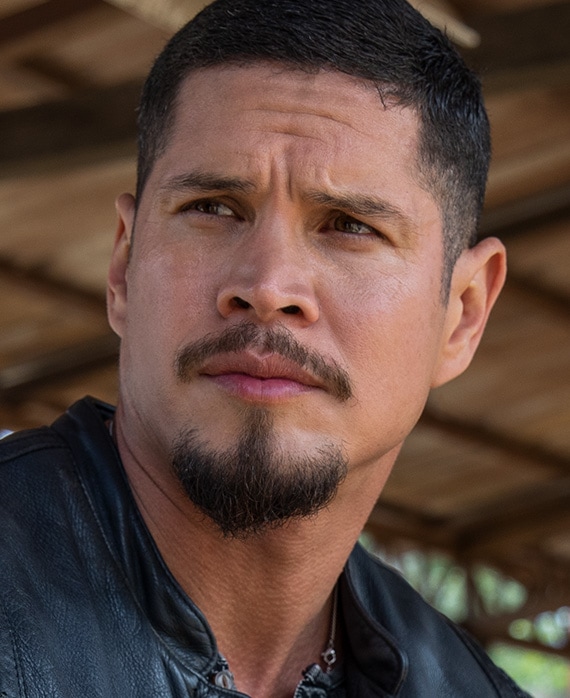 JD Pardo stars as “Ezekiel ‘EZ’ Reyes,” now a full patch member of the Mayans M.C. Santo Padre Charter, EZ embraces his new role within the club and thrives as an outlaw. But when the path to a different life presents itself, EZ finds himself torn between the light and darkness within.

Pardo first came to critics’ and audience’s attention for his starring role in A Girl Like Me: The Gwen Araujo Story, which chronicles the true story of slain transgendered teen, Gwen Araujo. Hailed as “heartbreaking and thoroughly brilliant” by The Hollywood Reporter, Pardo was nominated for an Imagen Foundation Award, which honors positive portrayal of Latinos in the media. He then joined Emma Stone, Nathan Fillion and Melanie Lynskey in the FOX series Drive. This was followed by a starring role alongside Charlize Theron and Jennifer Lawrence in Guillermo Arriaga’s film The Burning Plain. In 2012, Pardo was featured in The Twilight Saga: Breaking Dawn – Part 2 and was cast as one of the stars in JJ Abrams’ NBC series Revolution. He now stars in the Sons of Anarchy spinoff for FX, Mayans M.C., and was nominated for a second Imagen Award for his performance as “Ezekiel ‘EZ’ Reyes.” Pardo most recently wrapped production on Violence of Action for director Tarik Saleh alongside Chris Pine and Ben Foster.
See All Shows