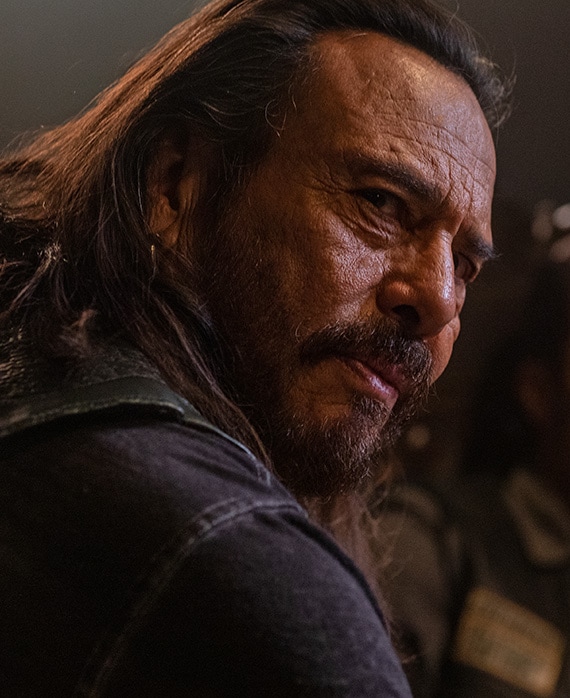 Raoul Max Trujillo stars as “Che ‘Taza’ Romero,” the Vice Presidente of Mayans M.C. Santo Padre Charter. As secrets from his past threaten his life and standing in the club, Taza fights to keep them hidden and kill the person attempting to bring them to light.

An accomplished actor, director, choreographer and dancer, Trujillo has enjoyed a career spanning more than 30 years and five continents.

Trujillo’s film credits include Cold Pursuit with Liam Neeson and Emmy Rossum, Soldado opposite Benicio Del Toro and Josh Brolin, Octavio Is Dead! alongside Sarah Gadon and Rosanna Arquette, Blood Father opposite Mel Gibson and Cowboys & Aliens opposite Daniel Craig. He was featured in Mel Gibson’s Apocalypto as well as Terrence Malick’s epic The New World, for which he choreographed a series of native dances. Other films include Bayou, The Blue Butterfly, Betrayed, The Adjuster, Montreal Vu Par, Black Robe and Highlander III.

On television, Trujillo portrayed “Massasoit” in the limited series Saints & Strangers, earning him a Critics’ Choice Award nomination for Best Supporting Actor. He can also be seen in Frontier opposite Jason Momoa, Neverland, Moby Dick opposite William Hurt and Ethan Hawke, Salem, Da Vinci’s Demons and The Wrong Mans. His other work includes the epic miniseries Tin Man, opposite Alan Cumming and Zooey Deschanel, which averaged more than 6.3 million viewers for the SyFy Channel. Additional television credits include Largo Winch, La Femme Nikita, The Sentinel, Renegades, JAG, Lonesome Dove, The Rez, The War of 1812, Sinbad and Witness to Yesterday. Dancing, the series for Public Television in New York in which Trujillo hosted, garnered him an Emmy® nomination for Best Performer.

Trujillo served as an original co-director and choreographer for the American Indian Dance Theatre, a company of 26 dancers formed in 1987 that still tours around the globe. He created, directed and performed in The Shaman’s Journey, originally commissioned by the Asia Society in New York and later adapted for film and television by PBS. He has directed numerous projects for Native Earth in Toronto, the Repertory Dance Theatre of Utah and has been a master teacher for the Aboriginal Dance Project in Banff, Alberta for more than 10 years.

When he's not on a film set, Trujillo divides his time between London, Los Angeles and his beloved New Mexico desert.