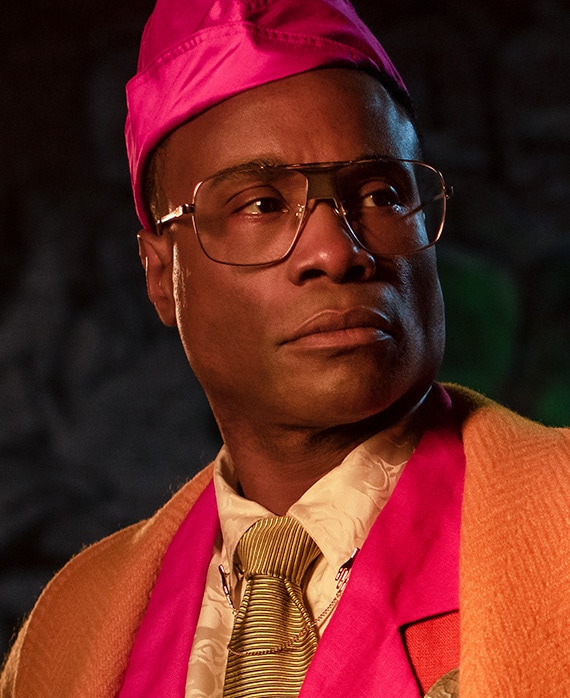 Grandfather to all the ball children and head of the MC Council, "Pray Tell," played by Billy Porter, grapples with a ball scene that has evolved beyond him. With his reduced involvement in the balls, the aspiring designer finds himself struggling with his sobriety, his past and his mortality.

Porter is an award-winning actor, singer, director, composer and playwright. He won the Emmy® Award for Outstanding Lead Actor in a Drama Series for his role in FX’s Emmy and Golden Globe®-nominated drama Pose, and recently received his second Emmy nomination for this role.

A Hollywood Walk of Fame inductee, Porter has numerous theater credits, including the role of “Lola” in the Broadway musical Kinky Boots, which he originated in 2013 and for which he won the Tony®, Drama Desk and Outer Critics Circle Awards, as well as the GRAMMY® for Best Musical Theater Album. Recently, Porter appeared in the second season of CBS All Access’ The Twilight Zone, FX’s American Horror Story: Apocalypse and he narrated HBO Max’s Equal. In 2021, Porter will be seen in the highly anticipated Cinderella re-make.

He is set to make his directorial debut with the high school coming-of-age film What If?, written by Alvaro García Lecuona.

Porter’s most recent single “Finally Ready” was released in June 2020. He also released his single “For What It’s Worth” in April 2020 to motivate potential votes for the 2020 presidential election.