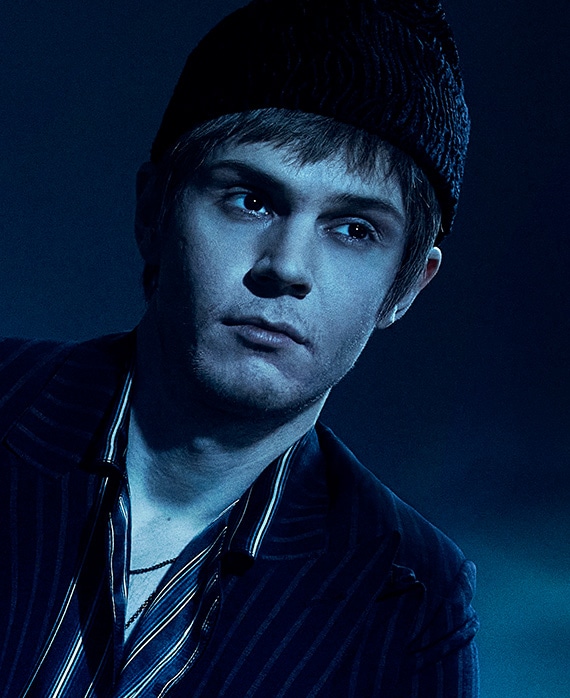 Peters is one of Hollywood’s most versatile actors with critical acclaim in both television and film. He has starred in nine installments of Ryan Murphy’s American Horror Story, where he has delighted fans and critics alike with memorable roles such as “Tate Langdon,” a murderous, psychotic teenager in the first installment Murder House and “Mr. March,” the man responsible for creating the sinister Hotel in the fifth installment. He received a Critics’ Choice nomination for lead actor in a limited series for his role as “Kai Anderson” in the seventh installment, Cult.

Currently, Peters can be seen as “Quicksilver” in the acclaimed Disney+ series WandaVision, a blend of classic television and the Marvel Cinematic Universe where super-powered “Wanda Maximoff” (Elizabeth Olsen) and “Vision” (Paul Bettany) live suburban lives. Peters also stars opposite Kate Winslet as “Detective Colin Zabel” in HBO’s drama series Mare of Easttown, directed by Craig Zobel. The series follows a detective (Winslet) in a small Pennsylvania town who investigates a local murder while trying to keep her life from falling apart. He previously starred in the first season of Murphy’s Emmy®-nominated, critically acclaimed FX series Pose.

Peters recently starred in the indie film I Am Woman, the Helen Reddy biopic directed by Unjoo Moon, which premiered at the Toronto International Film Festival, and reprised his role as “Quicksilver” in 20th Century Fox’s X-Men: Dark Phoenix, directed by Simon Kinberg, in which he starred alongside Jennifer Lawrence, Sophie Turner, James McAvoy and Michael Fassbender. He also appeared in X-Men: Days of Future Past and X-Men: Apocalypse.

Peters received standout reviews for his starring roles in American Animals, directed by Bart Layton and The Pirates of Somalia, starring opposite Al Pacino and Barkhad Abdi. Other film credits include Elvis and Nixon alongside Michael Shannon, The Lazarus Effect alongside Olivia Wilde and Mark Duplass and Matthew Vaughn’s critically acclaimed film Kick Ass alongside Nicolas Cage, Chloë Grace Moretz and Aaron Taylor-Johnson.

He first gained recognition in 2004 for his debut performance as “Adam Sheppard” in Michael Picchiottion’s film Clipping Adam. He won the award for Best Breakthrough Performance at the Phoenix Film Festival for portraying the life of a troubled teenager.