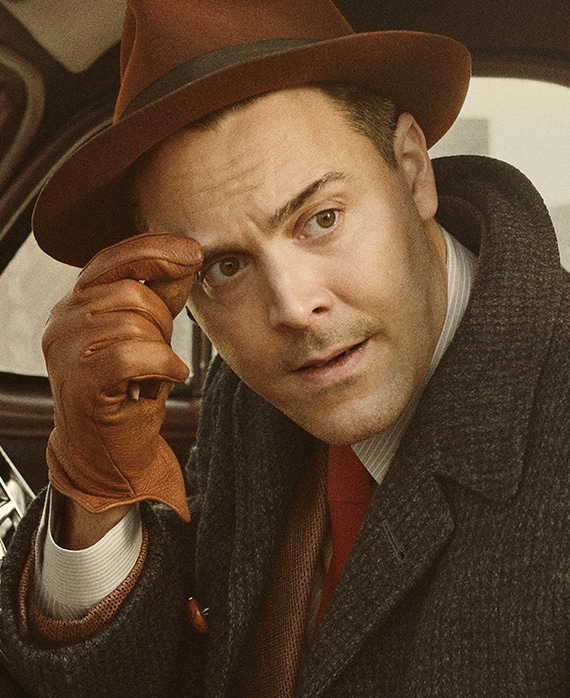 “Odis Weff,” portrayed by Jack Huston, is a WWII veteran and detective with the Kansas City Police Department. Odis suffers from OCD, but in 1950, he’s just a peculiar fellow who pounds nerve tonic to quiet his anxieties. Odis does not do well in high-stress situations, which can make his job very difficult at times.

Huston has distinguished himself as one of our industry’s finest young actors in film, television and theater. He will next be seen in the film Antebellum for Lionsgate opposite Janelle Monáe, which premieres on September 18, 2020.

Huston starred as “Eric Rudolph” in Manhunt: Deadly Games, which premiered in February 2020. His 2019 film credits include Earthquake Bird opposite Alicia Vikander and Riley Keough, directed by Wash Westmoreland, as well as Martin Scorsese’s Academy Award®-nominated The Irishman opposite Robert De Niro and Al Pacino.

Huston first gained recognition for his portrayal of “Richard Harrow” in HBO’s Emmy®-winning series, Boardwalk Empire, for which he earned a Screen Actors Guild Award for “Outstanding Performance by an Ensemble in a Drama Series.” In 2018, Huston starred in Matthew Weiner’s The Romanoffs for Amazon. Huston’s additional credits include the award-winning David O. Russell film American Hustle opposite Jennifer Lawrence, which earned him another Screen Actors Guild Award for “Outstanding Performance by a Cast in a Motion Picture,” Kill Your Darlings for Killer Films, David Chase’s Not Fade Away for Paramount Pictures opposite James Gandolfini and Bille August’s Night Train to Lisbon with Jeremy Irons.