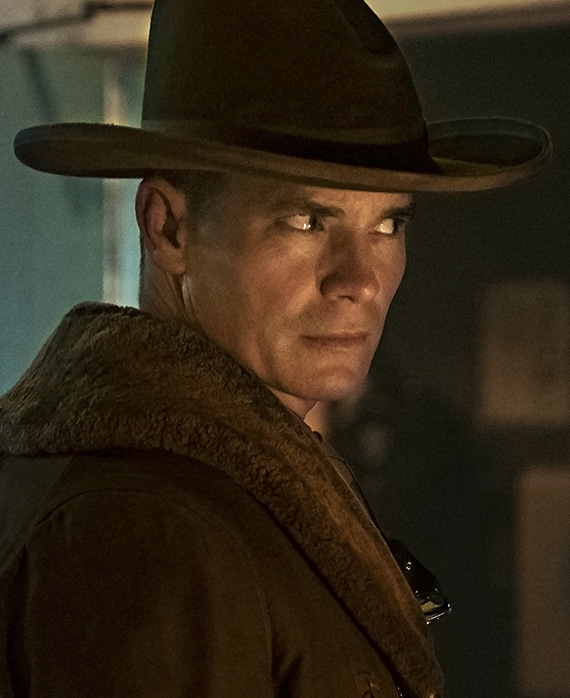 “U.S. Marshal Dick ‘Deafy’ Wickware,” portrayed by Timothy Olyphant, is a Utah law man and follower of Brigham Young. Dogged in his pursuit of escaped criminals, some say that Deafy is part hound dog. Incorruptible and devout, Deafy is an unwelcome presence for Kansas City’s criminal underworld.

With a robust career spanning nearly three decades, Olyphant is known for his poignant roles in both comedies and dramas.

Olyphant appeared in Quentin Tarantino’s critically acclaimed film Once Upon a Time in Hollywood opposite Leonardo DiCaprio, Brad Pitt and Margot Robbie. He lent his voice to the role of villain “Willard Stenk” in Missing Link, which also starred Hugh Jackman, Zoe Saldana and Zach Galifianakis. In television, Olyphant executive produced and starred in Netflix’s dark comedy Santa Clarita Diet.

Olyphant reprised his unforgettable role as “Sheriff Seth Bullock” in the acclaimed drama Deadwood for the 2019 HBO film Deadwood: The Movie. Additional film credits include Mother’s Day, Snowden, This Is Where I Leave You, I Am Number Four, The Crazies, A Perfect Getaway, Hitman and Gary Yates’ independent film High Life, which won “Best Canadian Feature” at the 2009 Calgary International Film Festival. In 2007, Olyphant starred opposite Bruce Willis in Live Free or Die Hard.

In 2004, Olyphant co-starred with Elisha Cuthbert and Emile Hirsch in The Girl Next Door. Additional credits include Go, Bill, Catch and Release, Dreamcatcher, Rock Star, Gone in 60 Seconds, A Man Apart, Scream 2 and A Life Less Ordinary. Olyphant also voiced the role of “The Spirit of the West” in the Academy Award®-winning animated film Rango.

Olyphant returned to the theater in New York where he began his career 25 years earlier with Kenneth Lonergan’s 2016 production of Hold on to Me Darling at the Atlantic Theater Company.

In television, Olyphant first garnered critical attention for his powerful portrayal of “Sheriff Seth Bullock” in Deadwood. The groundbreaking series was nominated for a Screen Actors Guild Award for “Outstanding Performance by an Ensemble in a Drama Series” in its third season. In 2015, he returned to television in a recurring guest-star role playing a fictionalized version of himself on FOX’s The Grinder, for which he won a Critics' Choice Television Award for “Best Guest Performer in a Comedy Series.”

Olyphant also enjoyed a prominent arc on FX’s award-winning series Damages, a recurring role on The Office and guest appearances on The Mindy Project, The League, Archer, My Name Is Earl, Samantha Who? and Sex and the City.