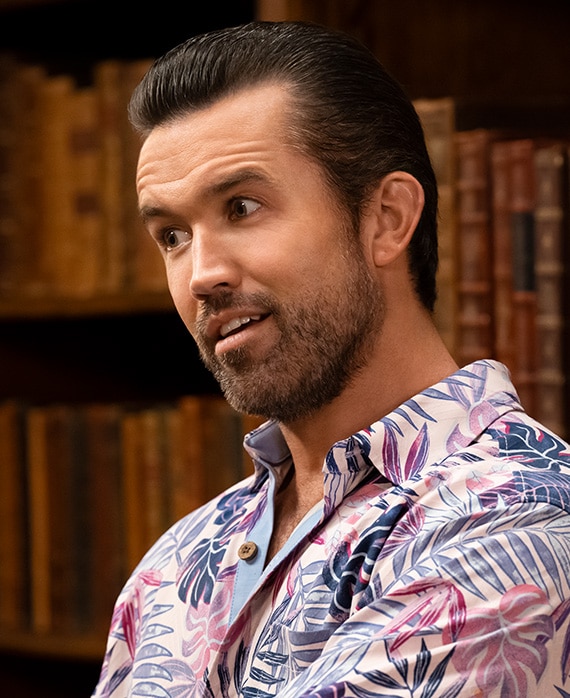 Rob McElhenney is the creative force behind the critically acclaimed FXX comedy series It’s Always Sunny in Philadelphia. McElhenney co-stars and serves as executive producer and writer. It was recently announced that the series has been renewed for four additional seasons – setting a record as the longest-running live-action television sitcom in history. Consistently delivering record-breaking ratings year after year, Sunny has been positioned as a cultural juggernaut on a global scale for its unapologetic satirizing of human nature.

McElhenney is also the creator, executive producer and star of Mythic Quest, the acclaimed comedy series that debuted on Apple TV+ in February 2020. The series, which is co-created by Megan Ganz and Charlie Day and is a co-production of Ubisoft and Lionsgate Television, is set in the development studio of one of the most popular video games in the world. Since its launch, Mythic Quest has been lauded by critics and audiences, and was recognized time and time again as one of the best new series of 2020. McElhenney and the team behind Mythic Quest also created a special “Quarantine Episode.” Not only was it shot entirely on an iPhone, it was written, developed and edited entirely during lockdown. This episode was celebrated as a perfect representation of our world during this climate. An additional season one bonus episode debuted on April 16, 2021, leading up to the highly anticipated second season premiere on May 7, 2021. The sophomore season is currently sitting at 100% Certified Fresh rating on Rotten Tomatoes.

In 2021, FX placed a two-season order for Welcome to Wrexham. This is a docuseries that tracks the dreams and people of Wrexham, a working-class town in North Wales as McElhenney and his business partner Ryan Reynolds take ownership of the town’s historic yet struggling football club. The year prior, McElhenney and Reynolds teamed up (before ever meeting in person) to take over chairman duties of the football club. Their hope is to turn the organization into an underdog story the entire world could root for – regardless of their experience with sports or working with one another.

A native of Philadelphia, McElhenney started his career working as an actor in small parts on the east coast until moving to Los Angeles. It was there he connected with Glenn Howerton (who co-wrote Sunny) and re-connected with Day (the two met on the 2001 horror movie Campfire Stories) and the three filmed the pilot on a camcorder.

He currently resides in Los Angeles.